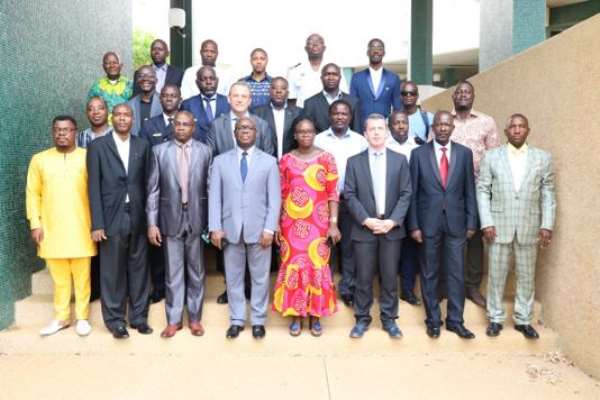 The Interregional Institute for Maritime Security (ISMI) has trained some fishery officers to fight Illegal, Unreported and Unregulated (IUU) fishing in the Gulf of Guinea.

Atleast 20 auditors comprising fisheries inspectors, naval officers, agents of fisheries administrations from 12 countries of the Gulf of Guinea have been equipped with the requisite knowledge and techniques to fight illegal fishing.

The first level training brought together 30 officers to participate in a 5day training at the Regional Academy of Marine Science and Technology (ARSTM) in Yopougon, Abidjan financed by the French cooperation via the Directorate of Security and Defense Cooperation (DCSD), and supported by the Republic of Côte d'Ivoire from 18th to 22nd February, 2019.

The participants were drawn from 13 countries such as Benin, Togo, Nigeria, Sierra Leone, Liberia, Ghana, Guinea Bissau, Guinea Conakry, Gabon, Congo, Senegal, Côte d'Ivoire and the Democratic Republic of Congo to clampdown on the activities of pirates on their territorial waters.

Speaking at the opening ceremony, Director of ISMI Abe Ake Lazare said to contribute to an effective response to this threat, ISMI, a strategic partner of the Interregional Coordination Centre (ICC), is organising the training course, which is intended to be more in-depth than last year's course.

According to him, IUU fishing is a serious global problem that has developed over the last 20 years and is one of the main obstacles to the sustainable management of fisheries.

He noted that IUU fishing has led to significant loss of income, especially for some of the world's poorest countries, where dependence on fisheries for food, livelihoods and income is high.

Abe Ake Lazare added that it threatens the survival of coastal communities in developing countries and the depletion of fish stocks around the world hindering conservation and rebuilding initiatives.

“This training course has been funded by France, a key partner of ISMI, through the support programme for the State Action at Sea in the countries of the Gulf of Guinea," Abe Ake Lazare emphasized.

The Regional Coordinator For State Action At Sea Guillaume de Beauregard noted that the seminar is of particular importance and must be treated with the utmost seriousness.

He indicated that IUU fishing is a key factor that contributes to increased maritime insecurity in the region.

Guillaume de Beauregard added that IUU fishing in the Gulf of Guinea encompasses many illegal activities that go beyond the traditional description and the law enforcement response to it is beyond the investigative and prosecutorial capacity and competence of most national fisheries authorities.

According to him, the transnational scope and complexity of these activities require extensive cooperation between law enforcement agencies within and across national boundaries.

He stressed that the seminar is being held to foster cooperation between States in order to identify useful synergies, promote information exchange and create a knowledge network beyond our borders.

“Training and capacity building of fisheries inspectors is not a luxury, but a necessity that is becoming more and more urgent every day,” Guillaume de Beauregard emphasised.