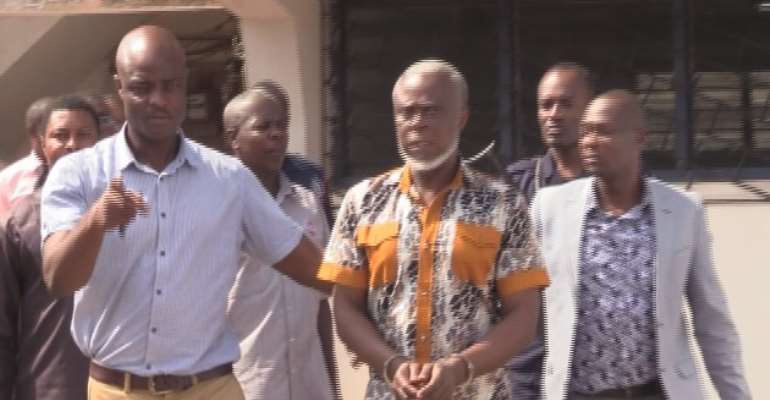 Lawyer for Dr Frederick Yao Mac-Palm, the Chief Executive Officer of Citadel Hospital, at Alajo, Accra, who is charged with conspiracy to commit crime and treason, has appealed to the Kaneshie District to order the police to send his client to the Korle-Bu Teaching Hospital.

Mr Victor Adawudu made the appeal yesterday after it emerged that the Police Hospital did not have a specialist to attend to the health needs of Dr Mac-Palm.

His appeal comes barely a fortnight ago, when the court granted a similar request made by Mr Adawudu, and ordered the Bureau of National Investigation (BNI) to send the medical practitioner for treatment at the Ghana Police Hospital.

Mr Adawudu told the court presided by Mrs Elleanor Kakra Bans to consider the health of his client and refer him to Korle-Bu where he could access quality treatment.

Mr Adawudu, stated that Dr Mac-Palm had expressed concern over the medication he was given at the BNI Hospital few weeks ago.

Dr Mac-Palm was charged together with Assistant Commissioner of Police (ACP) Dr Benjamin Agordzor and eight others for attempting to destabilise the country and overthrow the government.

The facts according to the prosecutor Assistant Superintendent of Police (ASP) Sylvester Asare are that Dr Mac-Palm and his colleagues belonged to an association called Take Action Ghana (TAG), and had planned to stage demonstrations, ostensibly to topple the government.

ASP Asare said in July this year, accused contacted a blacksmith from Alavanyo, in the Volta Region, to manufacture 22 explosives, six ammunitions and five pistols.

The court heard that the manufacturer charged alleged accomplices GH¢2,300 as the cost of each pistol and GH¢400.00 for each explosive.

The court heard that a search conducted on the premises of the Citadel Hospital revealed six unregistered pistols, one registered pistol, 22 explosives, three grenades, 63 rounds of ammunition, two empty AK47 magazines and other machines used in manufacturing weapons.

We’ll Resist Attempts To Use BOG’s Funds To Finance NPP’s El...
15 minutes ago

Obinim To Pay GHS1.6m Tax Liability; Court Throws Out His Ap...
54 minutes ago