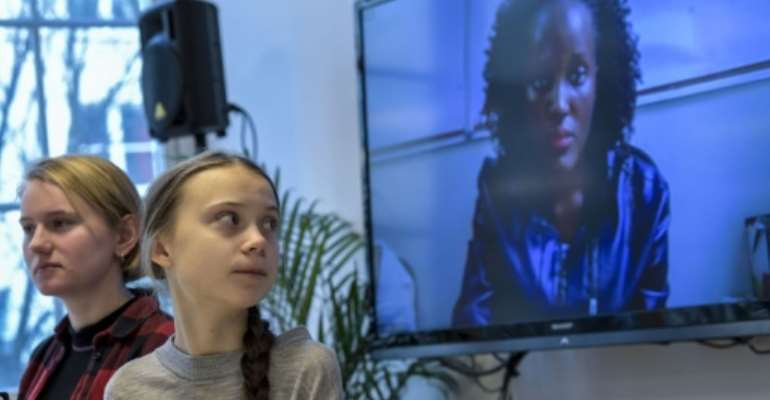 Greta Thunburg watches fellow eco warrior Vanessa Nakate, speaking from Kampala, after she was cropped out of a photo of young activists. By Pontus LUNDAHL (TT News Agency/AFP)

After a racism debate in Davos on the invisibility of African climate activists, Greta Thunberg held a press conference Friday with eco warriors from Kenya, Uganda and South Africa to stress the importance of their voices.

Vanessa Nakate of Uganda was at the heart of a viral debate at the World Economic Forum in Davos after she was cropped out of a news agency photo of young activists, including Thunberg, taken after a press conference.

A 23-year-old graduate in business administration, Nakate was the only black person and only African in the photo shoot.

She accused the Associated Press of racism in cropping her out.

The agency said the photographer had modified the photo for composition purposes.

"We're doing this press conference today so that people who need to be heard can share their stories to the media," Thunberg told journalists at Greenpeace Sweden's offices.

"Today we will be focusing on Africa as the African perspective is always so under-reported," she added.

So far, Africa is essentially blameless when it comes to climate change. 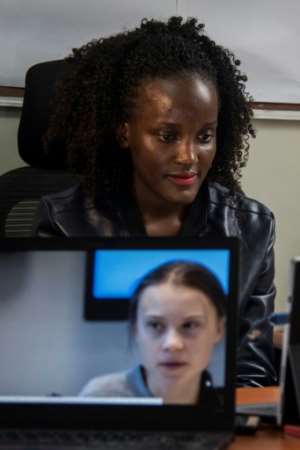 Nakate, speaking in Kampala: "This is the time for the world to listen to the activists from Africa". By Isaac Kasamani (AFP)

The continent is home to 17 percent of the world's population and more than a quarter of its nations, but only accounts for about five percent of the greenhouse gas emissions pushing the planet toward runaway warming.

The Swedish teen activist, who has become a household name since beginning her "School Strike for the Climate" in August 2018, said she would only answer a few questions before giving the floor to the African activists, who took part via video link.

Nakate, on camera from Kampala, was the first to speak out.

"This is the time for the world to listen to the activists from Africa and to pay attention to their stories... This is an opportunity for media to actually do some justice to the climate issues in Africa," she said.

Nakate, joined by Ayakha Melithafa and Ndoni Mcunu of South Africa and Makenna Muigai of Kenya, then spent the next hour answering journalists' questions.

Mcunu said "Africa only contributes about five percent to global greenhouse gas emissions, yet we are the most impacted" by climate change.

"Almost 20 million people have fled the continent due to these changes" and major droughts have caused "almost 52 million people to become food insecure," said Mcunu, a PhD student at Johannesburg's Witwatersrand University.

But she said that Africans have begun to adapt, using "indigeneous knowledge systems" incorporating "the knowledge that we have as Africans into the international research science and climate data awareness".

"How is it that we're not being spotlighted in these stories, that's the main challenge we have as a continent," she said.