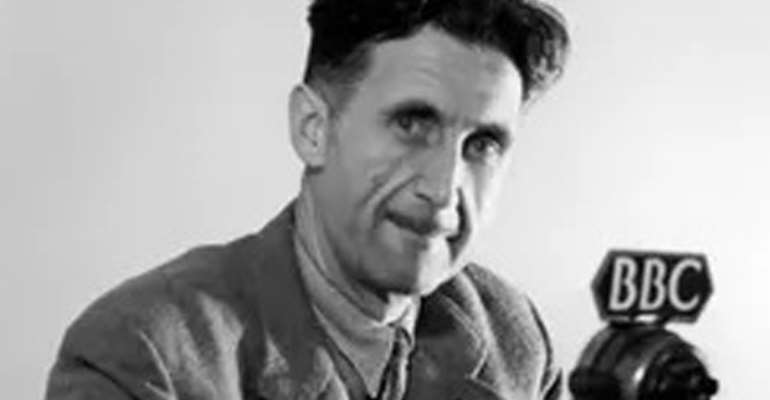 The lexicologist, Syme, in discussing his editorial work of the latest edition of the Newspeak Dictionary notes: “By 2050 – earlier, probably – all real knowledge of Oldspeak (English Language) will have disappeared. The whole literature of the past will have been destroyed. Chaucer, Shakespeare, Milton, Byron – they'll exist only in Newspeak versions, not merely changed into something different, but actually contradictory of what they used to be… The whole climate of thought will be different. In fact, there will be no thought, as we understand it now. Orthodoxy means not thinking. Orthodoxy is unconsciousness.”

Newspeak has simplified vocabulary; 'warm' is 'uncold'; 'do not proceed' is 'unproceed'. 'Plus' is an intensifier, replacing 'more', so that 'excellent' and 'best' are simply 'doubleplusgood'. '-ful' transforms any word into an adjective, hence 'speedful' replaces 'fast', 'quick', '-ed' forms the past tense of a word by eliminating conjunctions, e.g. 'He ran' becomes 'he runned'; 'she drank' becomes 'she drinked'; '-wise' transforms any word into an adverb. Therefore, 'they ran very quickly' becomes 'They runned plusspeedwise'.

Comes in Yaro Mugu or L'enfant Terrible, a very, very, young lawyer (doubleplusyoung lawyer) who had been TEIN – NDC KNUST President (2011 – 2012). Kojo Bonsu (Kumasi Mayor) Public Relations Officer (2012-2016); then the SRC President of the Ghana School of Law. When he beat a close competitor by over 6,000 to 2,000 to become the National Communications Officer of NDC (no longer Propaganda Secretary) he noted: “Following our frustrating loss to a government that rode on the back of lies to power, it was critical for those of us who were at the forefront of the party's communication to re-position our communication machinery in a manner that restores hope and belief to our grassroots and Ghanaians at large.”

After the arrest by the CID on the premises of Despite Group (UTV), he emerged a hero. Because it gave a great opportunity for people to comment, not about his alleged crime, but about the mafia-like arrest. “So couldn't the authorities choose a better timing and place for the job – it was a crude and unrefined method”, an ex-police officer intimated. “To say that Asemasi is an adept at braggadocio for foul language is to state the “obvious”, one critic observes. Another thinks: “That fine man has a prurient tongue, and he talks as if he has no parents to guide him.” A fierce critic thinks, “Well, why should he not use a cacophony of words: after all, luck had smiled on him and he had shot up at a very young age, he thinks he is the Solomon among his peers.”

While Yaro Mugu was in his elements, the Methodist Bishop of the Wenchi Diocese, Right Reverend Alfred Appiah Andam, was on the podium advising “… politicians to change their mode of electioneering from personal attacks and insults to that of engagement of the electorate on issues.” The preacher-man went on: “At times, I listen to political discussion on radio and I hear young people insulting adults and I ask myself why such young people should insult the elderly because of politics.” He added: “Whatever we do, whether we are politicians, whether we are clergy or laymen, we will give account of it one day before the Lord. This is what politicians should take note of.”

Some people argue that if you do not want to be smeared with insults, you must avoid politics. That is Ghana for you; this is a developing country. For political reasons, we have done away with 'under-developed' since, independence, but can we claim to be politically mature (NOT: matured)? Some people have written on their trucks: “The young shall grow”, and the young, indeed, are growing, but are we going to develop Mary Shelley's Frankenstein Monster or Prometheus (a human simulacrum) in democratic Ghana? The 8-foot tall creature of hideous character wreaked great havoc on his own creator Victor Frankenstein, who created him in a laboratory (out of chemistry and alchemy), and was rejected by everyone he met, and he himself was repulsed by his own appearance.

Meanwhile, the Ghana Library Authority initiates 'Read Walk' to give credence to the theme: “A sound mind for knowledge acquisition”. As noted by Hayford Siaw: “Promoting literacy and life-long learning is at the heart of the institution and so we embarked on this walk to raise awareness of reading and encourage Ghanaians to make good use of the 71 public libraries across the country because they are functioning affectively.”

Yes, we want to get our children to read. But as Polonius asks Hamlet: “What do you read, my Lord?” Hamlet: “Words, words, words.” Polonius: “What is the matter?” Hamlet: “Between who?” Polonius: “I mean, the matter that you read” Hamlet had regretted his youthful life: “And truly in my youth I suffered much for love, very near this. I'll speak to him again…”

And when you go to the good Old Book, you will read the sorry condition of Paul After Paul had tried to explain his 'conversion' to be a follower of Christ, he was brought before King Agrippa (Act Chapter 26), his eloquence prompted Agrippa to say in a loud voice: “Paul, thou art beside thyself; much learning hath made thee mad.” Should much learning make us mad, crazy, schizophrenic?