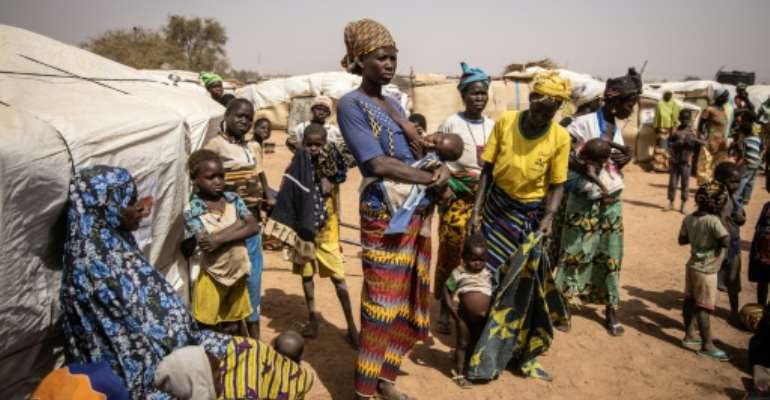 Thousands of people have fled the jihadist onslaught in northern Burkina Faso, holing up in a camp in the town of Barsalogho. By OLYMPIA DE MAISMONT (AFP)

Six soldiers were killed and several went missing Tuesday after a suspected jihadist attack in troubled Burkina Faso, following a weekend massacre which could have claimed up to 50 lives, security and local sources told AFP.

A military patrol struck an improvised explosive device while on the road from Madjoari to Pama in the eastern Kompienga province, a security source said.

"Six soldiers lost their lives during the attack," the source said, speaking on condition of anonymity.

The assailants fired on the soldiers after the explosion.

"Several others have gone missing," another security source said, adding that land and air reinforcements had been dispatched to the area "to find the missing soldiers and to track down the assailants".

The attack comes just days after a bloody jihadist attack on the village of Silgadji in the northern Soum province that killed up to 50 people, security officials said.

The assault was launched on Saturday and jihadists were still in the area on Monday, a resident in nearby Bourzanga town told AFP by phone, citing accounts from those who had fled.

"The terrorists surrounded the people at the village market, before separating them into two groups. The men were executed and the women were ordered to leave the village," the resident said.

The security source said: "Security teams are trying to get to the site but access to the village has probably been booby-trapped with homemade mines, and they are having to proceed carefully."

Jihadist groups have killed almost 800 people in Burkina Faso and displaced 600,000 more since the start of 2015, when extremist violence began to spread from neighbouring Mali.

Some 36 people were killed in two villages in northern Sanmatenga province on January 20.

Jihadist groups have killed almost 800 people in Burkina Faso and displaced 600,000 more since the start of 2015. By OLYMPIA DE MAISMONT (AFP)

Located in the heart of the vast Sahel region on the southern fringe of the Sahara, Burkina Faso is one of the poorest countries in the world.

Its army is ill-equipped and poorly trained to deal with the threat although in recent months commanders claim to have killed roughly 100 jihadists.

There are 4,500 French troops deployed in the region, which are now backed by armed drones, as well as a 13,000-strong UN peacekeeping force in Mali.

The day after the attacks in Sanmatenga, the Burkina parliament adopted unanimously a law allowing for the recruitment of local volunteers in the fight against jihadists.

Volunteers aged over 18 will be given 14 days military training, after which they will be given small arms and other communication equipment.

The recruits would be expected to conduct surveillance and provide information and protection for their communities in the event of an attack while waiting for security forces to deploy, according to Defence Minister Cheriff Sy.

According to UN figures, jihadist attacks in Burkina Faso, Mali and Niger last year claimed around 4,000 lives. Hundreds of thousands have fled their homes.

"This is the world's fastest-growing displacement crisis," Jan Egeland, the former UN under-secretary general for humanitarian affairs, said during a visit on Monday to Barsalogho, a small northern town that has taken in 10,000 people.

A young girl at a camp in Barsalogho, where 10,000 people have taken shelter from the violence. By OLYMPIA DE MAISMONT (AFP)

"In February 2019, there were 60,000 displaced people in Burkina Faso. Today, there must be more than 600,000," said Egeland, who is now secretary general of the Norwegian Refugee Council (NRC). "People are frightened."

Tahibata Ouedraogo, a mother of three, said she and her family had fled attacks at Guiendbila, 40 kilometres (25 miles) away, five months ago.

"We tried to return there after a while but were caught by terrorists, who flogged us and then executed the driver's mate of the vehicle which had been carrying us," she said, still traumatised from the event.

She also said that women were raped or suffered other sexual atrocities from the jihadists when they ventured out into the bush to look for firewood. Some of the women had died.

"They are killing our husbands and our children," said Ouedraogo. "What will become of us without husbands and children?"