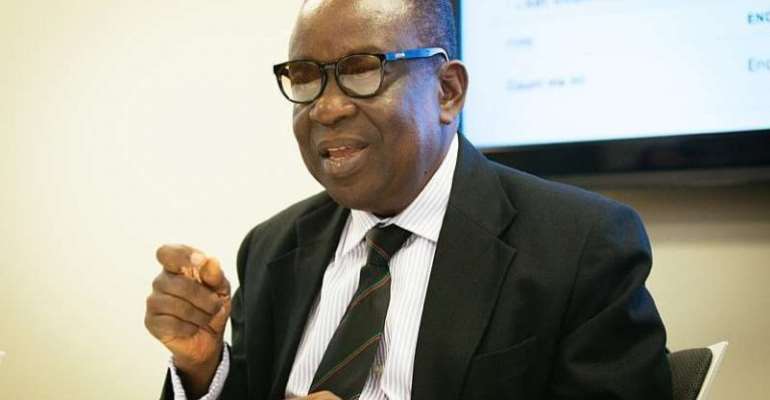 In the advanced countries especially USA and Europe, the relationship that exists between married men and other non-married ladies are heavily frowned upon and has legal implications when such men are found out by their wives. However, in our part of the world, though not legally and culturally acceptable, our society doesn't necessarily place punitive sanctions on a married man who decides to have a mistress.

KAN DAPAAH vrs CHIEF VIDEO
In recent times, two videos have gone viral on social media and that has got most Ghanaians talking about them. The first was the leaked video between Hon Albert Kan Dapaah who is the current National Security Minister which went viral on the 12th or 13th of January, 2020. Content of the video appeared to be a private conversation between him and his alleged ‘side chick’ but unfortunately got its way into the public domain. The second viral video emerged on or about 19th or 20th of this month. In this particular video a naked chief is appeared to be showing his manhood to his alleged girlfriend.

Morally, I do not hold any code or yardstick with which to measure anyone's behavior but for a chief to cheapen himself to the extent of showing his manhood to his girlfriend in a video chat is below the belt in my opinion. An action that hitherto has brought the name of his stool into disrepute and that may warrant him being destooled as a chief. The actions of the chief in the video is very abominable and highly denigrating to his person and very disgraceful to his subjects. When issues of this magnitude sprout up, I tend to ask myself questions; why would a man of his reputation show off his manhood to another lady in video chat? Why would the ladies also want such videos from men of high repute? Are they the same person who leaked the videos? What is its purpose? Why would a married man of high social standing decide to share his naked image with his 'side chick'?

In the Hon. Kan Dapaah's video there is nothing too denigrating about it, but was a little surprised why a lady could order a whole National Security minister about and record the conversation. When the video went viral, most people suggested that Hon Kan Dapaah should resign from his post. I was one of the few persons who supported that he should not resign. In my candid opinion, it was a private conversation between a man and his alleged girlfriend which is a normal occurrence between men and women across the globe.

I was of the opinion that, once the conversation bothered on his personal life and had nothing to do with his job, resignation to me meant that, men would become engendered species. His resignation, therefore, would embolden other women to emulate same and that could make men engendered species. As long as such conversations are private, if any woman decides to blackmail or sell such videos for whatever reason, and the videos go viral, such men should not be made to resign unless the content of the conversation undermines their integrity and job function.

HISTORICAL EXAMPLES
Great men have fallen because of their association with women and history is replete with such stories. Adam the first man according to the Bible was deceived by his wife Eve into eating the forbidden fruit and thereby going against God's will and the consequent punishment associated with it. King David, a man after God's own heart of the Bible is said to have lusted of his army officer Uriah's wife, got attracted, ensured that his officer was sent to the battlefield to fight at the front line just to get him killed and annex his wife. He was punished by God for that. Another great man who was fooled by his wife was Samson. The story is told that he revealed his secret to his wife Delilah. She subsequently used that against Sampson and he lost his strength, was arrested and made blind and died afterward.

In contemporary times, President Clinton and Monica Lewinsky scandal was a United States political sex scandal that involved 49-year-old President Bill Clinton and 22-year-old White House intern Monica Lewinsky. The sexual relationship took place between 1995 and 1997 and came to light in 1998. Clinton of America was nearly impeached because of his extra-marital affair with Monica Lewinsky. Mike Tyson was convicted of rape in 1992 and went to jail for that. That eventually was the beginning of his end as the heavyweight boxing champion. Similarly, Prime Minister Silvio Berlusconi of Italy was engulfed in a sex scandal that has him accused of paying for sex with a minor and that affected his image and reputation.

In Ghana, Dr. Richard Anane who was the transport minister in President Kuffuor's government in 2005, got himself embroiled into an extra-marital affair with an American lady, he was compelled to step aside, he was taken to the Commission of Human Rights and Administrative Justice (CHRAJ) and reappointed into office when there were no adverse findings against him at CHRAJ. These few examples have exited and gotten men into trouble of varying degrees and consequences. The deduction that can be made is that men are naturally promiscuous and the relationship between men and women would continue irrespective of these viral videos. The caution is that men must be careful when dealing with ladies who aren't their wives and under no circumstance should men of substance allow their ladies to video them in situations that can compromise their integrity and reputation.

CAUTION TO SO-CALLED SLAY QUEENS
It is not a crime for a man to have an intimate affair with a woman. Women are not under any obligation to date men or better still married men. But, when you decide to date any man of substance, whether for the fun of it or to benefit from his financial largesse, then ladies should try and play by the unwritten rules. For what reason would a lady record a video conversation of her big man boyfriend and leak same for what to achieve what? The ladies must acknowledge that the image such men have struggled to build over time and to destroy same by such ladies on the alter of leaked videos, is highly unacceptable. Why would any lady who has been pampered financially, decide to leak a private conversation between her and her bid man boyfriend? They should also note that most men in the high echelons of life are friends and such behaviors can affect them for the rest of their lives.

MOTIVATION FOR SUCH VIDEOS
The motivation of such practices could be money. Men who are bent on bringing other men down are the same people who would go at length to bribe such ladies to secretly record their men for them. In the Kan Dapaah's case, it has been allegedly suggested some elements within the ruling NPP government might have contracted the lady to leak the videos. Others are also blaming the opposition party. Whichever way the blame goes, the faceless men behind is my greatest worry. There is an Akan adage that says "if you cut your tongue and eat it, you haven't eaten any meat". So, if men intend on using ladies against other men, then we are turning our own selves into engendered species and that would augur well for men.

CONCLUSION
Men would continue to have amorous relationships with women. Some married men would have concubines and the ladies who decide to date such men must be careful. Today it is Hon Kan Dapaah and a chief whose videos have gone viral on social media, tomorrow it could be any man's video or audio that may also go viral on social media. Men must stand up and speak against such things before it escalates to uncontrollable proportions. Men must not rejoice over these but must rather sympathize with one another, support another in times like these. To the ladies who have done these, I leave them with their conscience but should also note that not all men are gentle and would allow you go scot-free when you ruin their image and reputation this way. Amorous relationships are built on mutual consent and one party can back out anytime he or she pleases but to destroy somebody's image in this manner is highly unacceptable.