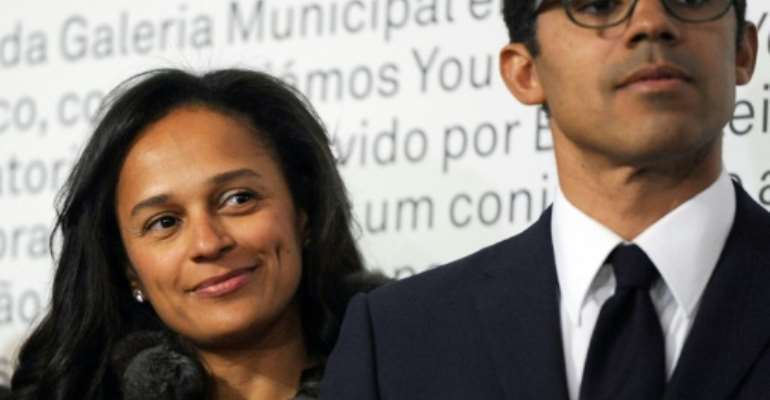 Angolan prosecutors have frozen bank accounts of Isabel dos Santos (L) and her husband Sindika Dokolo as part of their graft probe. By FERNANDO VELUDO (PUBLICO/AFP)

Leaked documents alleging the billionaire daughter of Angola's ex-president plundered state coffers to build her fortune have divided the nation.

Shocked at the accusations, some Angolans want Isabel dos Santos to face justice in a country reeling from the cronyism and iron-fisted rule of her father.

But others suspect a political smokescreen. The focus on the highly prominent dos Santos family, they say, means other elites who benefited under her father can go untouched.

Dubbed "The Princess" by many Angolans, she has been named Africa's richest woman by Forbes magazine, with estimated assets of around $2.1 billion (1.82 billion euros).

But she now faces scrutiny into allegations she looted public coffers.

"We lived in a country that constantly lacked electricity, thousands of children were out of school," she said. "Poverty still affects us today because of Isabel dos Santos." 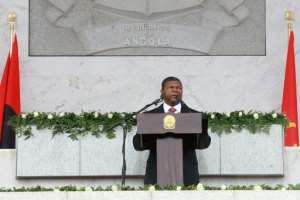 Angolan President Joao Lourenco purged members of the dos Santos family from government when he came to power. By AMPE ROGERIO (AFP)

Behind the shiny nightclubs and palm trees lining the beach in the seaside capital, ordinary citizens struggle to make ends meet in a country that is a member of the OPEC oil cartel.

Nearly a third of the population in sub-Saharan Africa's third-largest economy live in poverty.

Eduardo dos Santos stepped down in 2017, handing on to his anointed successor, Joao Lourenco.

Within months, Lourenco forced out Isabel dos Santos as boss of Sonangol, the state-owned oil giant, to which she had been appoined in 2016.

Prosecutors last month froze bank accounts and assets owned by dos Santos and her husband Sindika Dokolo as part of a probe into an alleged billion-dollar embezzlement. 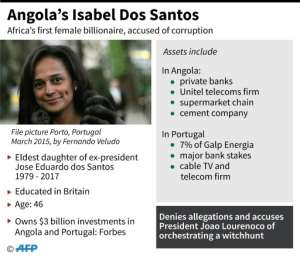 Dos Santos denies the allegations and accuses investigators of unjustly targeting her family for political reasons.

Most of the ex-president's family have moved abroad since he stepped down, and jet between homes in London, Dubai and Portugal.

The opposition has voiced scepticism about Lourenco's declared intentions for going after graft and the focus on dos Santos.

The ruling Popular Movement for the Liberation of Angola (MPLA) is to hold internal leadership elections next year -- a popularity test for Lourenco ahead of presidential polls in 2022.

Dos Santos told Portuguese media last week that she would consider running for the top job.

"I think we are all being destroyed by Isabel," said David Mendes, a member of the main opposition party UNITA.

"As we have more important issues such as hunger, lack of jobs... that (the government) cannot solve, they create distraction." 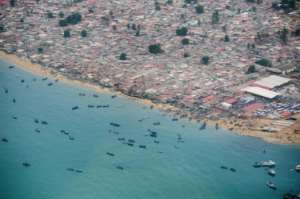 Ordinary Angolans struggle to make ends meet in an oil-wealthy country that is a member of the OPEC cartel. By Rodger BOSCH (AFP)

Political activist Jereminas Dito Dali said it was "strange" the so-called Luanda Leaks did not probe other high-profile figures suspected of graft.

He singled out ex-vice president Manuel Vincente, who escaped a corruption trial in Portugal after Lourenco pushed to transfer his case to Angola.

Vincente is now a deputy of the MPLA, which has ruled the country since independence in 1975.

"I am not one of those who believes that there is selective persecution," said Angolan journalist Carlos Rosado, who took part in the ICIJ investigation.

"We had to start somewhere," he explained. "Now the judicial authorities must extend the scope of investigations to other sectors."

The leaks should be an "opportunity" for the government to fight impunity across the board, said Rosado.

"You cannot stop here... in the dos Santos family," he told AFP. "Corruption in Angola is a widespread thing."

Dos Santos herself has fired back, blasting the ICIJ investigation as an "orchestrated" political attack.

"People are concerned about the capacity of the current Angolan government to manage political priorities," she said in a statement this week.

"Instead of reducing poverty, we have seen the impoverishment of a growing middle class and the destruction of the private economy."

But for Geraldo Dala, a philosophy professor, "this investigation into Isabel dos Santos is overdue."

"We all knew her fortune was built because of her father's influence and the diversion of public funds," he said. "How else would a woman in her thirties become the richest in Africa?"