Two dead in Guinea at start of sweeping anti-government rally 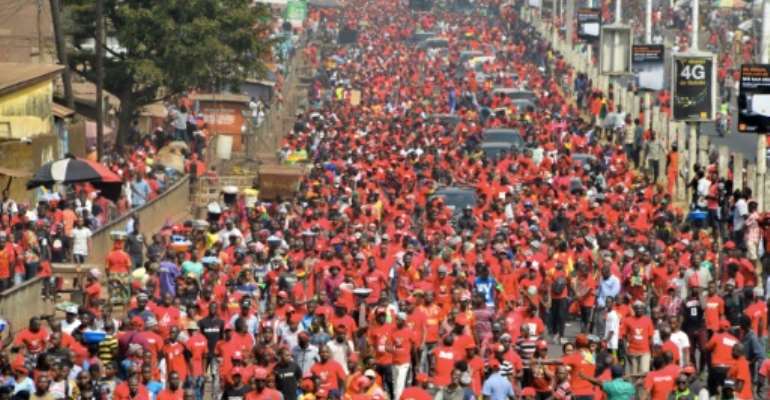 The West African country has been wracked by demonstrations since mid-October over concerns Conde intends to use a planned constitutional reform to extend his rule. By CELLOU BINANI (AFP)

Two youths were killed in Guinea on Monday at the start of open-ended protests against President Alpha Conde's suspected bid to prolong his rule.

The West African country has been wracked by demonstrations since mid-October over concerns that Conde intends to use a planned constitutional reform to seek a third term in office.

At least 20 civilians and one gendarme have been killed since the start of protests, which have drawn hundreds of thousands of people while scores have been arrested.

Scuffles broke out on Monday in the Coza suburb of the capital Conakry between young people and the police, an AFP journalist said.

Elhadj Mamadou Sow, a 21-year-old student, was killed in the unrest, according to his uncle, who declined to be named.

The security ministry confirmed Sow's death and said an investigation had been launched.

The ministry also confirmed the death of another protester in the northern city of Labe.

A hospital source had earlier told AFP that the 18-year-old was shot in the head, adding that the death prompted protesters to attack a courthouse and the local office of Conde's Guinean People's Assembly (RPG) party.

After months of organising mass protests, the National Front for the Defence of the Constitution (FNDC), an alliance of opposition groups, raised the stakes last week and called for "huge" and "open-ended" demonstrations.

Conde, 81, has neither confirmed nor denied the claim that he put forward a draft constitution last month intending to keep himself in office for a third term.

The government on Sunday accused opposition leaders of seeking to plunge Guinea into disorder. The FNDC had called for a peaceful protest.

Guinea's Security Minister Albert Damantang Camara also said on Monday that he has "the manpower, methods and capabilities" to intervene whenever necessary.

Shops and schools were shut across Conakry on Monday, an AFP journalist said, while streets were mostly empty of traffic.

"The FNDC's call for resistance is being widely followed in several cities in Guinea," the opposition group said in a statement.

"This has resulted in a total paralysis of the main roads, the closure of shops and businesses," it added.

The FNDC also confirmed that there had been clashes in Conakry, and in the cities Boffa and N'Zerekore.

Abdourahmane Sanoh, the group's spokesman, told AFP the start of the protest had been "a success".