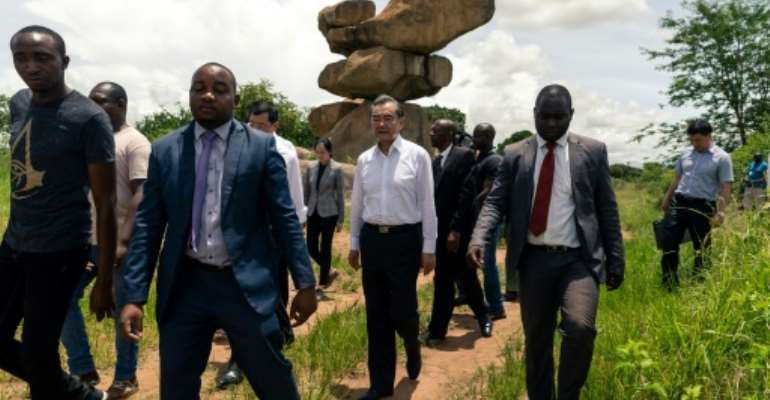 China's foreign minister Wang Yi on Sunday pledged to strengthen cooperation with Zimbabwe despite a spat over bilateral aid figures in November.

The two countries butted heads after Zimbabwe's government said it had only received $3.6 million in aid from Beijing in 2019 -- 40 times lower than the figure claimed by China.

Yi met his Zimbabwean counterpart Sibusiso Moyo on Sunday during the final leg of an Africa tour that also took him to Egypt, Djibouti, Eritrea and Burundi.

He did not mention financial assistance, but hailed China and Zimbabwe's "win-win cooperation in infrastructure, agriculture, and mining" and vowed to explore new areas of cooperation.

China's relationship with Zimbabwe dates back to the liberation struggle of the 1970s, when Beijing supported some of the top guerilla leaders.

After the end of white-minority rule in 1980, China was one of the first countries to establish a diplomatic mission in the capital Harare.

Under former president Robert Mugabe, Zimbabwe adopted a "Look East" policy after a fallout with the US and the EU over rights abuses and controversial land reforms.

Beijing remained one of Mugabe's most powerful allies and a major trade partner, even as the West shunned him over human rights violations.

The relationship has continued to thrive under President Emmerson Mnangagwa, who took over when Mugabe was toppled by his army generals in 2017.

China has funded and provided loans for many infrastructure projects across Africa in recent years, including the new parliament and a school of intelligence in Zimbabwe.

"China has so far helped Africa build more than 130 medical facilities, 45 stadiums and more than 170 schools in the past close to five years," Yi told reporters in Harare.

He then had dinner with Zimbabwe's Vice President Constantino Chiwenga, who spent months in China last year for medical treatment.

Meanwhile, Zimbabwe's opposition parties have criticised China's influence and accused the government of giving away minerals and other natural resources in exchange for aid.

Zimbabwe's economy has been reduced to tatters by decades of mismanagement under Mugabe, who died of cancer in September last year.

Mnangagwa has so far failed on his promise to redress the situation.

Years of rampant hyperinflation have rendered life unaffordable for most and basic goods such as bread and fuel are hard to come by.