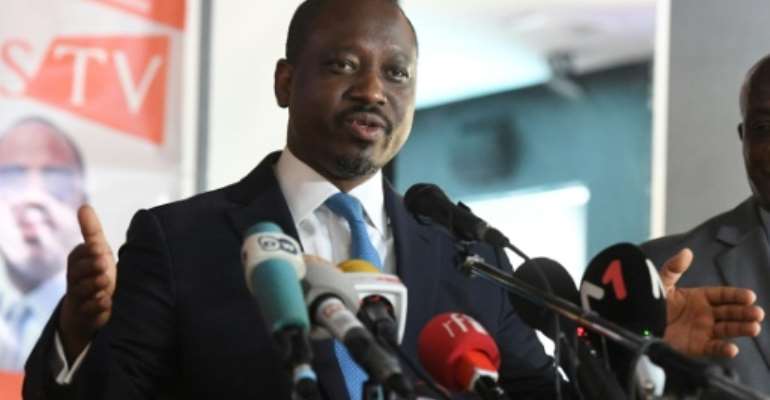 Guillaume Soro is hoping to run in the 2020 election in Ivory Cost. By ISSOUF SANOGO (AFP/File)

Soro was due to head back to the country on Monday after a six-month absence but he diverted his flight when security forces stormed his party headquarters in Abidjan.

Prosecutors then issued an arrest warrant for Soro, whose planned return has raised tensions in the West African nation ahead of a presidential election next year.

The onetime prime minister -- who is planning to run in 2020 -- also faces allegations that he was launching an operation abroad to try to discredit the current regime in Ivory Coast, Adou said.

The prosecutor said the claims were based in particular on an audio recording which was aired at the press conference and in which two men, one of them purportedly Soro, are heard speaking.

Adou insisted the recording was not a fake, but refused to give any details about it, other than to say it was made by the Ivorian intelligence services.

He also said more than 15 of Soro's supporters had been arrested and accused of "conspiracy against the state" -- the same charge listed against Soro himself in the international arrest warrant and an offence punishable by life in prison.

Weapons had been found during searches, Adou said, but did not disclose when or where they were conducted.

Among those arrested, five of them are pro-Soro lawmakers who were detained despite having parliamentary immunity, the prosecutor said.

On Monday, Adou said Soro was also under investigation for embezzlement of public funds and money laundering for amounts up to 1.5 billion CFA francs (2.2 million euros).

Soro's lawyer and close aide Affoussiata Bamba-Lamine issued a statement on Facebook on Wednesday, blasting the accusations as "spurious" and saying they were designed to frame him and prevent him running in 2020.

A longtime Ouattara ally, Soro has since fallen out with the Ivorian head of state, reportedly because of his own presidential ambitions.

Political analysts say Soro is popular, in particular among young Ivorians, but there are no independent opinion polls to estimate his support nationwide.

On Monday, Soro's flight was diverted to Ghana, and eventually flew on to Europe, as tear-gas wielding officers stormed the offices of his Generations and People in Solidarity (GPS) party offices in the economic hub Abidjan.

He later accused the security forces of "unacceptable brutality" in a statement on Twitter.

Tensions are already building ahead of the October 2020 poll in the world's largest cocoa producer.

Soro, a Christian from the north of the country, headed rebels fighting against then president Laurent Gbagbo in the country's civil war in 2002.

The revolt split the former French colony into a rebel-held north and government-controlled south, triggering years of unrest.

Gbagbo was later ousted after refusing to concede defeat to his arch-rival Ouattara in the 2010 election.

Soro's support was crucial to Ouattara, whom he then served as prime minister in 2011-2012 before becoming parliament speaker until 2019.