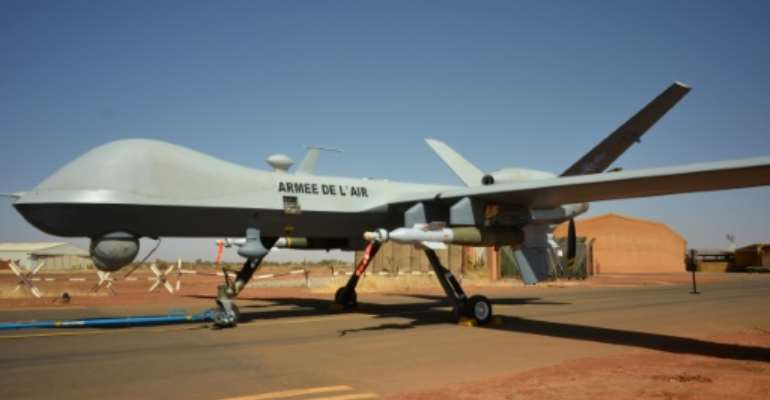 The use of armed drones is controversial: the United States has been criticised for deploying them in campaigns in Afghanistan, Pakistan and Yemen. Rights groups say the distance-piloted weapons dehumanise warfare. By DaphnÃ© BENOIT (AFP)

The drones, which have already since 2014 provided surveillance support to the French anti-jihadist Barkhane mission in Mali, Niger and Burkina Faso, will from now on also be able to strike targets, she said.

France joins a small club of countries, including the United States, Britain and Israel, that use armed, distance-piloted aircraft in combat.

The Reapers will each carry two 250-kilo (550-pound) laser-guided bombs, and are entering service after a series of operational tests carried out from the airbase in the Niger capital Niamey.

"Their main missions remain surveillance and intelligence... but these can be extended to strikes," Parly said.

"This is a new capacity, not a change in doctrine. The rules of engagement of armed drones are exactly the same as for fighter aircraft."

France's 4,500-strong Barkhane force is fighting a seven-year-old jihadist revolt in the Sahel that has seen thousands of civilians killed, and hundreds of thousands fleeing their homes.

French President Emmanuel Macron will visit Niger at the weekend to pay homage to 71 soldiers from the West African country who were killed in a jihadist attack this month.

France will also host a summit on January 12 in the southwestern town of Pau on the ongoing conflict, to be attended by the presidents of Burkina Faso, Chad, Mali, Mauritania and Niger.

"The point is that when you are monitoring an area, if you identify enemies and there is an urgent need to deal with that target, the armed drone will be able to do it," French air force chief of staff Philippe Lavigne told AFP in Niamey on Sunday.

The French army has five of the drones in total, with two of them on the mainland for training. It will receive six more next year, equipped with GPS-guided missiles. The drone fleet is set to increase to 12 in 2025 and 24 by 2030.

The use of armed drones is controversial: the United States has been criticised for deploying them in campaigns in Afghanistan, Pakistan and Yemen. Rights groups say the distance-piloted weapons dehumanise warfare.