I Expect To Win With Not Less Than 54% -Musah Ali 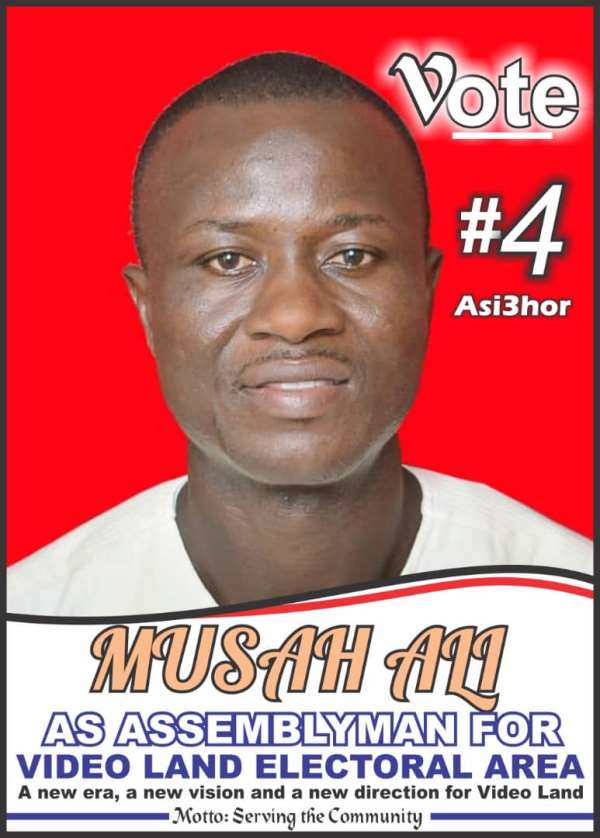 Musah Ali said that he expects to win with not less than 54 % of votes to be casted by electorates on Tuesday based on his campaign messages .

The Videoland Electoral Area Aspirant was speaking to this reporter at Nima, a suburb of Accra, on Sunday, when he made the remarks.

He disclosed that he was motivated to contest based on his passion and commitment to serve the people at the grassroots, especially the less fortunate ones.

On education, he promised to focus much on the Junior High School where most of the students fail during Basic Education Certificate Examinations (BECE).

He bemoaned that much focus is placed on Senior High school (SHS) than the JHS, which is the basis.

To this end, he promised to collaborate with his colleague alumnus at both the university and SHS to organise classes for both JHS 2 and 3 students respectively to help prepare them towards BECE exams.

This, the aspirant is sure will help them make good grades at the JHS level, thereby avoiding the difficulties with which parents of students with bad aggregates go through when looking for schools for their wards at the SHS level.

He also hinted on the need to stop school going age children from visiting internet cafes and other ghettos in the area during school hours.

On sanitation, he mentioned that because most of our gutters were not properly constructed they lack slopping which on many occasions results in water stagnation after downpours.

There is therefore the need to give them a face-lift by making sure slopping is added to the gutters to do away with water stagnation which breeds mosquitoes and other sicknesses like cholera. He said he will access the District Assembly Common Fund (DACF) to ensure this is achieved.

He promised to provide slabs to cover the gutters to also prevent rubbish collected from the gutters ending up in the same gutters after some few days.

" This has been a long age problem where most MPs and Assemblymembers do organise clean up exercises but the rubbish collected are left on the shores of the gutters and the rubbish after few days gets back into the gutters".

I believe the slabs if provided will help end or at least minimise this problem in the community.

Mr. Musah Ali further disclosed that he will coordinate with the Municipal Assembly to get one rubbish container every morning to collect all rubbish created in the area.

This is to save us from rubbish been dumped in the area after been returned back home by children as well as the dumping of refuse in the various corners of the area by bad people because of lack of rubbish containers.

Care for the elderly in the area is another area Musah Ali says he will focus on. He will in this direction make sure the non working oldies in the area especially women benefit from the LEAP amount been paid to the aged in various communities in Ghana.

He expressed the worry that since the introduction of LEAP no elderly person within the area has ever benefitted from it.

He therefore promised to use his office as Assembly Member to liaise with the Municipal Assembly to ensure our oldies also benefit from the national cake even if the amount is small.

He stressed that care for the elderly would his first major assignment when voted for. In my girst 100 days I will make sure I work to ensure realisation of this agenda for our old people who are most often forgotten during the sharing of national cake.

On what makes him unique among all the candidates vying for the top Assembly position, Mr. Musah Ali noted that he is the only groomed and nurtured politician with the requisite skills needed to succeed at the grassroots level. Even though the other candidates may have their skills, politically, I am the best amongst them.

He said his campaign message is been received well by the electorates and that feedbacks from the people give him the hope he will win massively.

Based on resounding feedback I get from the people give me the confidence and I expect to win with not less than 54% of votes to be casted on the voting day.

He used the opportunity to urge for calm and peaceful election from the four respective candidates and their supporters.

We are brothers who have the community at heart hence availing ourselves to serve the people, we must therefore not create enmity amongst us because of votes.

believe whoever wins, we all accept and support the person to develop our beloved community. We must therefore campaign on issues and ideologies and not on insults and accusations.

The outcome of the elections either positive or negative will not affect the passion, plans and work I have and been doing for the people,Hon.Musah Ali emphasised.

Hon. Musah Ali is in the race with other three candidates vying for the Assembly Member position for the Videoland Electoral Area under the Ayawaso East Municipal Assembly in the Greater Accra Region.