Behind the glitz, Nigerian entertainers struggle to cash in 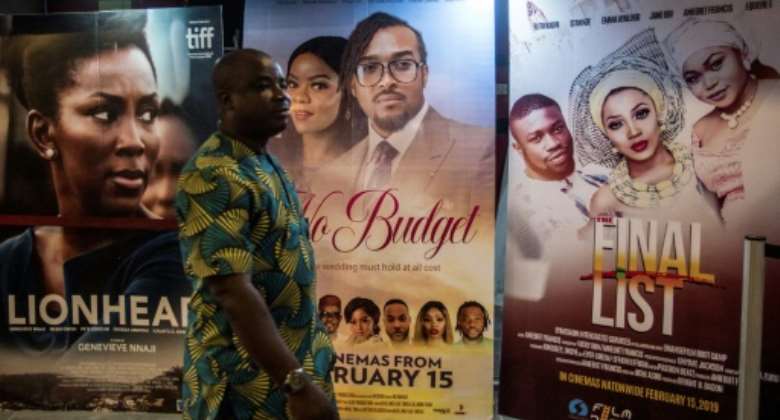 Nigeria has a thriving entertainment industry, but many of its stars and workers struggle to earn money. By CRISTINA ALDEHUELA (AFP/File)

Fake eyelashes fluttered, bespoke suits were on display and slick music videos played at the inaugural edition of The Entertainment Fair and Festival in Nigeria's economic hub Lagos in late November.

But behind the glitter, the reality of the film and music sectors in Africa's most populous nation can often be far less glamorous: wages are low, there are no social protections and copyright law is rarely enforced.

That comes despite the country boasting the second most productive film industry in the world and some of Africa's biggest pop stars.

Hits by singers like Burna Boy, Wizkid and Davido play non-stop on stations across the continent and Nollywood churns out some 2,500 movies each year.

Despite the successes, revenues from Nigeria's entertainment and media sector in 2018 lagged well behind that of the continent's other leading economic powerhouse South Africa at $4.5 billion compared to $9.1 billion, PwC said.

That difference is not down to output or demand as Nigeria produces more, exports more and has a domestic market of some 200 million people, four times bigger than South Africa.

Instead industry insiders insist it is a problem of organisation.

In a bid to help remedy the issues facing the industry, veteran Nollywood star Omotola Jalade-Ekeinde came up with the first entertainment business fair, known as TEFFEST.

It is aimed at bringing together actors, singers, producers, insurers, lawyers and managers to better organise the sector.

"The entertainment industry has grown without structures, without a roof," Jalade-Ekeinde, nicknamed "Omo Sexy", told AFP.

"For decades, we were not taken seriously and the big corporation companies didn't consider us."

The situation has changed as the industry has grown and now companies like Netflix are looking to step up their involvement in Nollywood and international labels attempting to tap Afropop stars.

Nigerian actress, philanthropist and TIME 100 Most Influential People Award recipient Omotola Jalade Ekeinde speaks during the 'Nollywood Meets Bollywood' event at the African Development Bank Annual General Meeting 2017 in Gandhinagar, some 30 kms from the Indian city of Ahmedabad on May 24, 2017.The African Development Bank (ADB) is holding its 52nd Annual General Meeting in the western Indian state of Gujarat between May 22-26, the first time the event has been held in India.. By SAM PANTHAKY (AFP/File)

"We produced, we grew, we became something suddenly and now the corporate world is trying to understand how we work and how they can deal with us," Jalade-Ekeinde, AKA "the Queen of Nollywood", said.

But the problems riddling the industry means it is often difficult to invest.

"There is nothing to celebrate here," said Efe Omoregbe, manager of singer 2Face and former board member of the Copyright Society of Nigeria (COSON), which was dissolved by the government due to an internal conflict.

"We should be fixing and addressing major structural issues (...) We live in a culture of abuse when it comes to copyrights."

PwC estimates that 80 percent of the pirate CDs globally can be found in Nigeria and singer Brymo says that in almost 20 years performing he has never received any money from his songs playing on local radio stations.

"Internationally, we make money through digital distribution platforms that have taken over rapidly, but locally it's mostly with gigs or endorsement deals," he said.

Lawyer Simeon Okoduwa said he tries to insist on artists signing a contract with producers before working with them.

"Too many film shoots or recordings are still done based on promises and handshakes," he said.

This is an issue that leading actor Michelle Dede knows only too well.

"Before producers thought I was being pretentious," she said.

Despite the improvements she still decries the lack of protections for performers or a minimum wage for actors and others involved in the industry such as make-up artists, cameramen and technicians.

Nollywood is a vast employer in Nigeria -- with some estimates saying it offers jobs to one million people -- but much of that is very precarious.

"We make more money on building a brand than acting," said Dede.

"But I shouldn't be focusing on how many likes I get on Instagram, I should be working on my roles."

Despite the drawbacks, the entertainment industry is still a major draw in a country where almost half the population live in extreme poverty.

But Dede said she still has no regret of leaving her job in marketing in London to launch herself in Nollywood.

"Nothing makes me happier than acting," she said.

"Even though the pay is not good, there is no way I would give up on that."