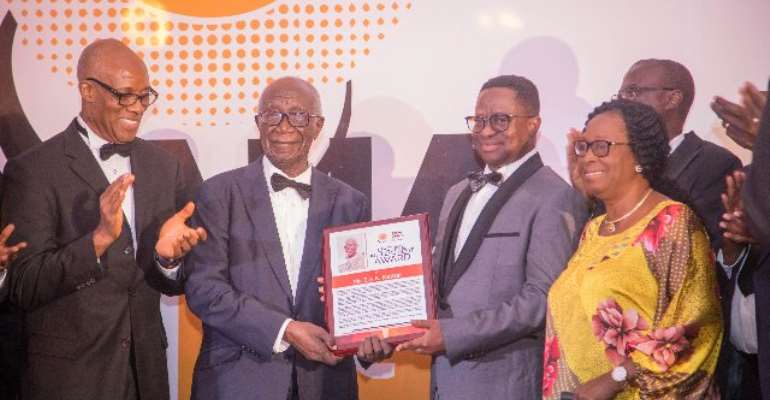 A former Chief Executive Officer of the Volta River Authority (VRA), Erasmus Alexander Kalitsi has been celebrated with an honorary Lifetime Achievement Award at the 2019 Ghana Energy Awards for his landmark contributions at the VRA which have impacted the country tremendously.

Mr Kalitsi, surrounded by both past and current employees of the VRA, as part of his recognition was presented with a citation that summed up a chronicle of his outstanding contributions, a plaque and a beautiful portrait.

Initially, he was responsible for planning, mobilizing and managing VRA’s finances. He was later appointed Head of Resettlement Department which involved resettling 80,000 people affected by the flooding of the Volta Lake.

He was later appointed Director of Finance with responsibility for all the Authority’s financial dealings including securing financing for the expansion of the Akosombo Dam.

In 1971 at the age of 41, Mr Kalitsi was appointed one of two initial Deputy Chief Executives (DCE); a position he held until 1983. In his role as the DCE, among others, he led the development of water-borne transport systems on the lake and the management of the socio-economic and environmental impacts of the Volta reservoir.

During his time, the VRA produced all the electricity consumed in Ghana, from the Akosombo and Kpong hydroelectric plants as well as the Takoradi thermal plants. The Authority also supplied neighbouring countries of Togo, Benin and managed the Volta Lake, the World’s largest man-made lake.

After leaving the VRA, Mr Kalitsi worked in various roles with international agencies; first with the World Bank in Washington D.C. on African Electricity Companies where he focused mainly on Water and Electricity sectors in the Western Africa region, later with the Commonwealth Secretariat.

He returned home to assume the role of Managing Director of the Electricity Corporation of Ghana (ECG) where he focused on measures to improve the operational efficiency of the utility, reduction of losses and expeditious collection of bills. He advocated the application of cost-reflective tariffs.

In 1991 Mr Alexander Kalitsi became the VRA’s fourth Chief Executive. He held this position until 1998 when he stepped down on appointment as Chairman of VRA’s Board of Directors, becoming the first person to hold the roles of both Chief Executive and Chairman of the Board.

Achievements
At the Volta River Authority, Mr Kalitsi played leading roles in the planning, financing, implementation, operational management and expansion of both gigantic hydro plants at Akosombo and Kpong with installed capacity over 1,100 MW of electricity.

Under his leadership as Chief Executive, VRA achieved many firsts including the planning, development and initial operation of Ghana’s first major thermal power plant in Aboadze with a capacity of 550MW and the introduction of private sector participation in the power sector in Ghana through a joint venture between VRA and CMS Energy of the USA.

Mr Kalitsi also played a pivotal role in the development of the national transmission system and the interconnection of the electrical systems of Ghana with those of neighbouring countries namely Togo, Benin and Cote d’Ivoire.

He has served on the boards of many institutions, including the Aluminum Industries Commission where he was a member for seven years and mostly acted as its Chairman. For eight years he served on the board of Volta Aluminum Company Ltd (VALCO). He was a member of the Court of Governors of the Ghana Institute of Public Administration (GIMPA) where he served over eleven years and was for several years Chairman of its Finance and Development Committee.

Mr Kalitsi has participated in the work of many professional institutions. He was from 1998 to 2000 a Forum Member of the World Commission on Dams, 1991 to 2001 a Council Member of the International Hydropower Association. He was an active participant in activities of the World Energy Council (WEC) from 1988 to 2006.

In 1978 the Government of Ghana awarded Mr Kalitsi the National honour of Grand Medal in recognition of his services to the country. He has other national honours from the governments of Togo, Benin, France and Italy.

Mr Kalitsi has a degree in Economics from the University of Ghana, 1955. He has a Master’s degree in Public Administration from Harvard University, 1961.

Since his retirement, Mr Kalitsi has been providing advisory services in the areas of Energy and Water sector development, social and environmental impact of major projects in public sector management.