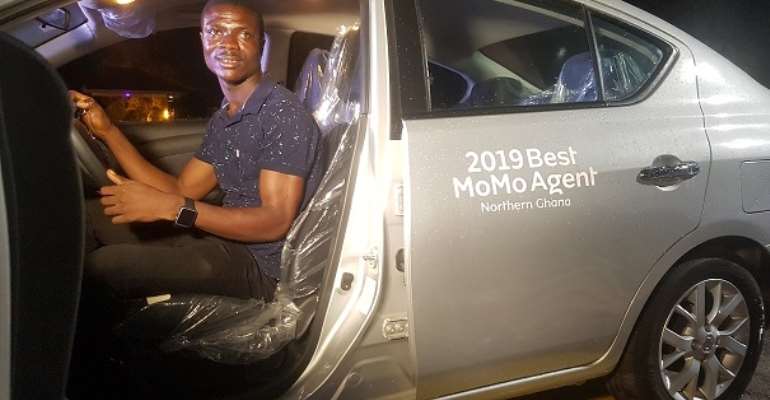 It was all joy when MTN rewarded some hard-working and loyal Mobile Money agents and merchants over the weekend in Kumasi.

Some 50 merchants and agents out of about 400 selected partners of MTN received various prizes during a massive dinner at the plush Golden Tulip Kumasi City Hotel.

Items picked up on the night include television sets, motorbikes, and kiosks. Other lucky ones won fully sponsored trips to Dubai and a brand new car for the ultimate prize winner.

Welcoming guests to the awards dinner, the Senior Manager for General Trade, MTN Northern Sector, Mr. Simon Amo used the opportunity to reiterate the need for people to be fraud-conscious in order to protect themselves from being victims of Momo fraud.

He cautioned Momo users to keep their PINs to themselves and change it immediately another person gets to know of it.

His comments showed how concerned the leading telecoms company in Ghana is about the numerous incidences of Momo fraud, with their clients obviously, being the most victimized.

MTN has also not been happy about the recent fraud and armed robbery attacks on their agents and merchants and has rolled out an insurance scheme to protect them and their monies.

Mr. Francis Osei of Franco Prestige ventures at Ahodwo who won the ultimate prize recounted how he started from humble beginnings seven years ago and expressed heartfelt appreciation to MTN for the recognition.

“I thank God that my hard work has paid off after all”. He noted joyfully encouraging other agents to work hard and treat customers with respect.