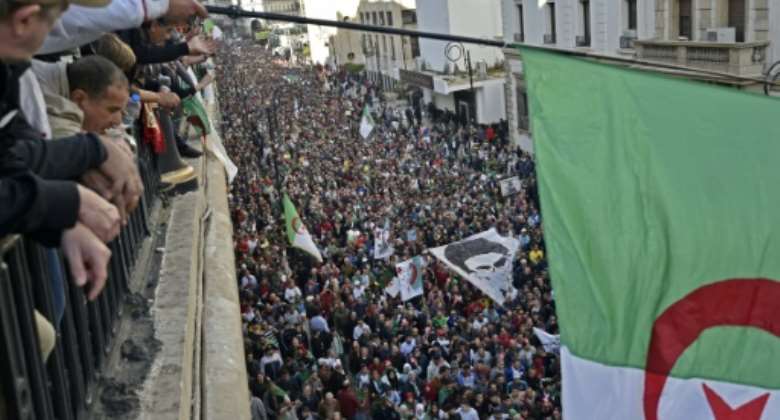 Activists in Algeria have staged mass protests against a December 12 election they see as an elite attempt to cling to power. By RYAD KRAMDI (AFP)

Social networks set alight the months-long protest movement against Algeria's establishment, but as a contentious presidential poll looms, bots and trolls are staging an online comeback to bolster the regime.

The protests which erupted in February forced the resignation of veteran president Abdelaziz Bouteflika within six weeks.

Activists, who have made savvy use of social media, vowed to continue their struggle following Bouteflika's departure and have staged mass protests against a December 12 election they see as an elite attempt to cling to power.

Arabic and French hashtags including #FreeDemocraticAlgeria and #TheyMustAllResign have gone viral online, echoing chants in the streets as protesters urge a boycott of the presidential poll.

Algerians also took to Twitter and Facebook to ridicule interim president Abdelkader Bensalah's comments that the impact of protests had been overblown.

But with the approach of the vote, anonymous trolls and automated bots are sowing discord in an apparent bid to discredit the protest movement and revive support for the regime.

Immediately after the date of the presidential election was announced in mid-September, two hashtags opposing the protest movement's boycott call appeared and quickly spread on Twitter: #Algeria_vote and #Don't_Speak_In_My_Name.

Protests in Algeria which erupted in February forced the resignation of veteran president Abdelaziz Bouteflika within six weeks. By FRANCOIS GUILLOT (AFP/File)

The protest movement has dubbed the trolls behind this counter-offensive "electronic flies", saying they also lodge complaints against anti-establishment pages and posts, doctor protesters' slogans and slander activists.

Marc Owen Jones, an assistant professor at the Hamad Bin Khalifa University in Doha who studies propaganda and disinformation on Arab social media networks, has analysed some 20,000 tweets under these hashtags.

A very high number of accounts were "suspicious, generated by trolls or bots", he said.

And "a significant number of accounts were created in September, including a large proportion... in the space of just two days," he told AFP.

These hashtags are "clear evidence of a disinformation campaign", Jones concluded.

Activists say they have also been targeted by false reporting against their content, a tactic they say has led to pages being suspended and the removal of purported legitimate content.

Lokman, who did not want to give his full name, is a cofounder of "Fake News Dz", a Facebook page which identifies falsehoods spread on the Algerian net.

He said his daily monitoring has found "an organised campaign to report pages which directly attack the establishment".

Arabic and French hashtags including  #FreeDemocraticAlgeria and #TheyMustAllResign have gone viral online, echoing chants in Algeria's streets as protesters urge a boycott of the presidential poll. By RYAD KRAMDI (AFP/File)

Said Salhi, vice-president of the Algerian League for the Defence of Human Rights, lamented that "it's impossible to know who hides behind these attacks -- their accounts are anonymous".

Algerian internet users have launched a digital campaign denouncing Facebook's policy, which they accuse of undermining their freedom of expression.

In November, they organised sit-ins in front of the firm's offices in many European capitals.

"Algerians rely on Facebook to share their ideas in the face of an illegitimate regime," said one students' association.

Yet the social media giant does not react to "hate speech by trolls" against the protest movement, the association complained.

Salhi noted that unlike the pro-government players online, activists do not hide their true identity, leaving them exposed.

Given the authorities' lockdown of traditional media, "Facebook is a last resort for activists, but it is also an information space for the security services," he warned.

Activists in Algeria say they have been targeted by false reporting against their content. By RYAD KRAMDI (AFP/File)

On Thursday, the prosecutor's office in Oran, some 350 kilometres west of Algiers, demanded 18 months jail time for renowned cartoonist Abdelhamid Amine, whose dark depictions of Algerian leaders have been an online hit.

Human Rights Watch has warned that police reports in court files show "a special brigade on electronic crimes has been monitoring the social media activities" of some protest leaders.

The rights group warned that "the monitoring reports form the basis for vaguely worded charges of harming state security or undermining national unity."