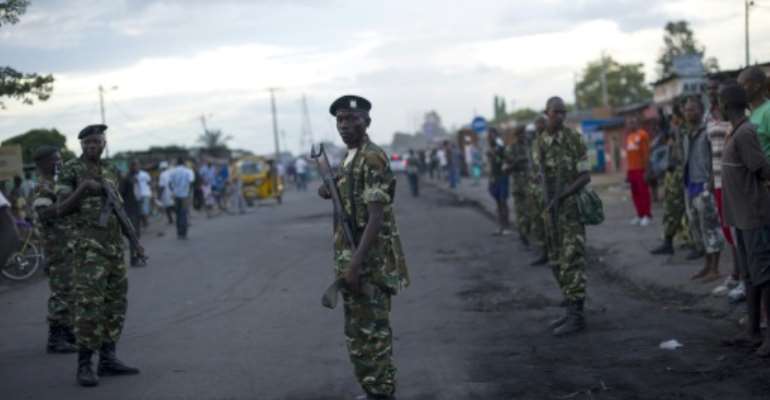 A deadly attack on the Burundi army last month near the Rwanda border has sent tensions soaring between the neighbours, with Bujumbura directly accusing Kigali of armed aggression.

The assault took place late at night on November 16 on Twinyoni Hill, around 100 kilometres (62 miles) north of Bujumbura, in thick forest some five kilometres from the Rwandan border.

The attackers were equipped with bulletproof vests and night-vision goggles, according to survivors.

An initial government tally put the death toll at eight, however a top military official -- his account backed up by relatives and local media -- said 19 were killed and 20 injured.

It was the deadliest attack by an armed group on Burundian soil since 2015, when President Pierre Nkurunziza announced he would seek a third term in office, plunging the country into a deadly political crisis and economic recession.

Initially Bujumbura blamed the attack on "a group armed with rifles who came from Rwanda", however the government later directly accused the Rwandan army, without giving evidence of their charge.

In recent days the Burundi government, accusing Kigali of "armed aggression", has filed a complaint against its neighbour at the regional East African community (EAC) bloc, according to documents seen by AFP.

The same complaint has been filed with the African Union, United Nations and International Conference on the Great Lakes Region (CIRGL), according to an African diplomatic source.

The EAC has yet to respond officially, but the CIRGL announced it would send a "verification" mission to Burundi and then Rwanda which will wrap up by December 10.

"The mission is expected in Bujumbura" this week and will also "go in the field where we will present evidence of Rwandan aggression. Then they will go back to Bujumbura before heading to Kigali," a high-ranking Burundian security services official told AFP.

Kigali has categorically denied any involvement in the attack.

"It is not true that the attack was carried out by people coming from Rwanda. These are unfounded allegations coming from Burundi, that they have already made these past four years. We have other things to do," foreign affairs state secretary Olivier Nduhungirehe told AFP after the attack.

Kigali has regularly accused its neighbour of stirring tensions in a bid to distract the international community from rights violations, which have been documented by the UN, on its own soil.

In the past Burundi has accused Rwanda of training and supporting Burundian rebel groups, while Kigali charges its neighbour is hosting Hutu rebels from the anti-government Democratic Forces for the Liberation of Rwanda (FLDR).

However it is rare for Bujumbura to pin the blame directly on Rwanda's army.

The spokesman for the Burundi presidency Jean-Claude Karerwa Ndenzako warned on Twitter last week that if such an attack reoccurred, Burundi "reserves the right to legitimate defence, and especially, the right of pursuit".

"We hope that these organisations (EAC, CIRGL) will this time emerge from their inertia and clearly condemn Rwanda for its aggression, even if we don't have much hope," a top government official told AFP on condition of anonymity.

"Rwanda has been warned, we will no longer tolerate the contempt of its leaders."

Families of the victims have criticised the Burundian government for burying their relatives in haste.

"The 19 soldiers were buried in three small groups, without the presence of any top government or military official," one of these relatives told AFP on condition of anonymity.

The spike in tension comes six months ahead of general elections in Burundi that are riddled with uncertainty.

In power since 2005, Nkurunziza surprised observers when he said he would not run in the 2020 polls shortly after a much criticised referendum and constitution change allowed him to do so.

It is unclear who will be the ruling party's candidate.

Meanwhile opposition leader Agathon Rwasa -- who like Nkurunziza comes from a Hutu rebel group -- has accused the government of intimidation and violence against members of his party.