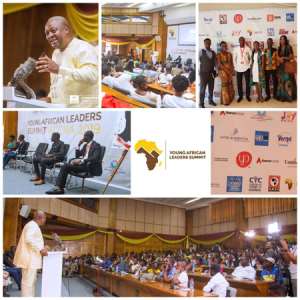 The Maiden edition of the Young African Leaders Summit has successfully been held in Accra, Ghana, with over 300 delegates from 30 countries across Africa.

The event afforded the youth the opportunity to engage on issues spanning multiple areas including political, social, economic, cultural, and business disciplines.

Themed, “Securing the Future of Africa; The Role Of The African Youth, Young Business Leaders And Entrepreneurs, the summit collated ideas from some of the continent's finest youth figures and aggregated them into relevant themes able to shape policy on the continent.

Gracing the occasion was the immediate-past President of the Republic of Ghana, John Dramani Mahama, who charged the youth to display a strong sense of leadership towards building a progressive and inclusive Africa.

According to him, it is terrible for young people in Africa to exclude themselves and look unconcerned about issues affecting their immediate societies and the country as a whole.

Mr. Mahama, during an interactive session with the youth gathered noted that “The problem we have in Africa is that when you talk about leadership, it is all about political leadership. We need to create leaders in every facet of our society. Don’t wait for that future that is to come. Wherever you are, start being a leader and make a change”.

“I want people to start thinking and believing that they can make a difference no matter how overwhelming the challenges of Africa are,” he said.

Also, delegates had the opportunity to explore Ghana's capital, interact with citizens, taste some Ghanaian meals and experience various types of Ghanaian culture including the kete dance by the Ghana Dance ensemble.

In an interview with the Programmes Director for the summit, Patrick Fynn, he noted that Young Politicians and Leaders Network is a global movement of young change agents dedicated to training its cohort to take up leadership roles to influence the future of Africa and the world in general.

President of the Young African Leaders Summit,
Emmanuel Addo, in his farewell address to the delegates said: “By attending this year’s Summit, you have proven to be dedicated to changing and impacting our generation and at Young Politicians and Leaders Network , we will be with you at every step of the way.

He assured that in the coming months, there will be some interesting innovation coming up with a vision of establishing branches in all African countries, especially countries that participated in this year’s Summit and build a strong base for youth development.

The summit also featured an awards ceremony where Seven people were awarded, one from each award category for their contributions in putting Africa on the world map.

Amongst them were Robert Kyagulanyi Ssentamu known by his stage name Bobi Wine, a Ugandan musician, actor, businessman, politician and philanthropist.

The others were Nigerian musician Davido who won the Entertainer of the year, coming ahead of Stoneboy, Nasty C and Mr. Eazy and Cameroonian social entrepreneur, Javnyuy Joybert, who also took away the award of Entrepreneur of the year beating the likes of Adulai Bary of Guinea Bissau and Richard Nii Armah Quaye of Ghana.

The two-day event also served as a platform for cross-country idea-sharing and assimilation and an opportunity to bridge identity gap that is often perceived to exist within the youthful population of Africa.