Governance in Imo: What Citizens Must Do – Dr. Duru 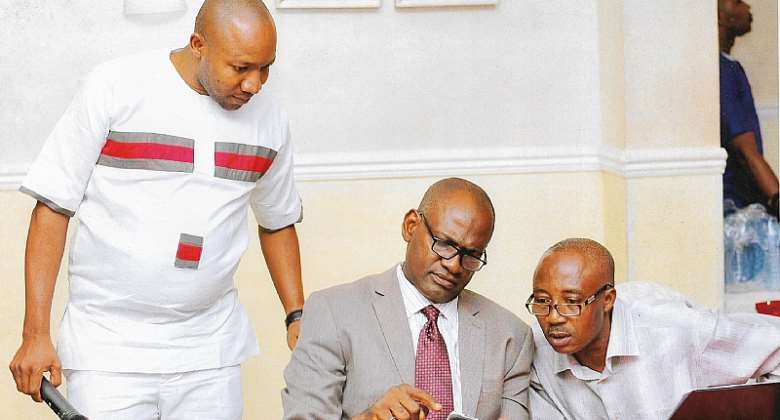 Dr. Chike Walter Duru is a Communication, Governance and Development expert. He is Senior Special Assistant, Media and Communications, Office of the Deputy Governor of Imo State. He is Chairman, Board of Governors, Freedom of Information Coalition, Nigeria and a member of the National Steering Committee of the Open Government Partnership- OGP, Nigeria. In 2015, Duru was listed as one of Nigeria’s top ten Media Executives. He consults for reputable local and international organizations, including the British Council/DFID and United States Agency for International Development-USAID. In this interview with newsmen, he speaks on governance in Imo State, transparency in governance, Open Government Partnership, citizens’ participation, among others. Excerpts:

Background
I am Dr. Walter Duru. I am Senior Special Assistant, Media and Communications, Office of the Deputy Governor of Imo State. I hold a Doctorate Degree in Mass Communication from the University of Uyo, Nigeria. I got my Master’s and Bachelor’s Degrees in Mass Communication from University of Nigeria, Nsukka and Imo State University, Owerri, respectively. I did my Secondary education at Holy Ghost College, Owerri, while my Primary Education was at College of Education Demonstration Primary School (Shell Camp), Owerri. I was Head of the Department of Mass Communication, Madonna University, Nigeria, where I taught specialized courses in Communication. While in active media practice, I rose to be a Deputy Editor of a National Daily newspaper. I am an online Publisher. I am a Communications and Advocacy Consultant with the British Council. I also consulted for USAID. I chair the Board of the Freedom of Information Coalition, Nigeria. I am a member of the National Steering Committee of the Open Government Partnership- OGP Nigeria, where I co-chair the Access to Information Working Group. I am a good governance advocate, with special interest in transparency in governance. Do I continue?

In 2015, you were listed among the top ten media executives in Nigeria by the International Biographical Center. How did it happen?

Imo State has applied to join the Open Government Partnership. You are a member of the National Steering Committee of OGP Nigeria. What is the OGP about?

Open Government Partnership (OGP) is a multi-stakeholder initiative that focuses on improving government transparency, accountability and responsiveness to citizens through technology and innovations. It was launched in 2011 by eight founding member-countries, following their endorsement of the Open Government Declaration. The eight countries are: Brazil, Indonesia, Mexico, Norway, The Philippines, South Africa, United Kingdom and United States of America.

Nigeria joined the OGP in July 2016, two months after President Muhammadu Buhari attended the Anti- Corruption Summit organised by the government of the United Kingdom in May, 2016. At the Summit, the Nigerian President reaffirmed his government’s commitment to strengthening anti-corruption reforms and bringing integrity to governance through leadership by example.

In Imo State, the present administration of Chief Emeka Ihedioha has left no one in doubt, as to his commitment to running an open and transparent government. He has applied to join the OGP. This is a step in the right direction. The next thing to do is to bring stakeholders together to take it forward. There is need to set up a State Steering Committee, made of state and non-state actors. OGP promotes co-creation. The implication is that there is equal representation and equal rights in decision making. All decisions are taken collectively. There is no chairperson. What we have are Co-chairs for Civil Society and Government, respectively. The truth is that if we are able to effectively implement OGP in Imo, it will be a success story. Fit and proper persons, with relevant experience and capacity should be selected to drive OGP in Imo State. The good thing about the OGP is that states are at liberty to choose the commitments that they can implement.

The role of citizens
Good governance is not possible anywhere, without effective citizens participation. Public office holders will naturally take the citizens for granted, whenever there is a docile citizenry. The Government holds and manages the common wealth of the people on trust. It is the duty of the citizens to hold those in public positions accountable. If citizens do not take steps to participate in the business of governance, then they have failed in their duties. When citizens ask relevant questions, taking advantage of existing laws and instruments, those in public offices will naturally sit up, knowing that the people are watching. When citizens begin to ask questions, public office holders will become more careful and corrupt practices reduced. In Imo, we have an administration that has shown commitment to transparency principles. It is now for the citizens to play their part.

Laws that empower citizens to hold the government accountable

Apart from the 1999 Constitution, as amended, Nigeria’s Freedom of Information Act is a very powerful tool for citizens’ participation in governance. The FOI Act aims to make public records and information more freely available and to protect public records and information, in accordance with the public interest and protection of personal privacy. It enables citizens to hold the government accountable in the event of the misappropriation of public funds or failure to deliver public services. It also seeks to protect serving public officers against any adverse consequences from the unauthorized disclosure of certain kinds of official information, and to establish procedures for the achievement of these purposes. The Act further regulates conflicts between its provisions and those of other legislation including the Criminal Code, Penal Code or Official Secret Act that prescribe criminal penalties for actions connected to the disclosure of Information. Fortunately, Imo State now has an FOI law.

Most developed countries of the world hinged their development on access to information. The effective implementation of the FOI Act will open the governance space; engender transparency and accountability, while enhancing citizens’ participation in governance.

If citizens take advantage of the FOI Act, cases of poor execution of government projects and in some cases, outright abandoning of projects will be checked.

Making Annual Budget available to citizens
It baffles me when some state governments deliberately keep the annual budget of their states away from citizens. It is very strange. A Budget is a Law, just like every other law made by the legislature and assented to be the Governor or President, as the case may be. It should be available everywhere and people should not go through difficulties in accessing them. Keeping it away from the citizens is criminal. If citizens do not have copies of the annual Budget, how then can they monitor budget implementation? How can they point out issues with the appropriation? In fact, at every stage of the budget cycle, citizens should participate actively, from inception to implementation. This is one sure way of monitoring government expenditure.

Assessment of the present administration in Imo State

Without mincing words, Governor Emeka Ihedioha has started very well. He is laying a solid foundation for good governance in Imo State. One of the major things conspicuously missing in the last administration of Chief Rochas Okorocha was transparency. The last administration had a culture of corruption and impunity. In fact, former Governor Okorocha presided over Imo’s most corrupt administration, since the creation of the state. This administration inherited a state on life support and is taking steps to adequately tackle the challenges created by the last administration. You can see that loopholes and conduit pipes for stealing of state resources have reasonably been blocked. Structures are being put in place to ensure that enduring good governance systems are built. From Treasury Single Account; to OGP and many other reforms. What about audit of the civil service? Can you see the number of ghost workers already identified and the savings it will make for the state? What about the Pensions verification and payment? It will only take a mischievous person not to recognize the efforts of the present administration, considering where we are coming from in Imo State.

Infrastructural deficit
It is no news that there are no good roads in Imo State. It is a shame that within five months of the exit of the Rochas Okorocha-led administration, there are no good roads in Imo State. Ihedioha inherited a state with decayed infrastructure and very high debt profile. They almost stole the state to death. I do not envy Governor Ihedioha because he took over from a very unpatriotic administration. However, I am proud to say that the present administration is people-oriented and is committed to addressing the numerous challenges in governance.

The Deputy Governor of Imo State, Hon. Gerald Irona is a selfless, dependable and responsible leader. He is a grassroots politician, who takes special interest in putting smiles on the faces of people. His commitment to the success of the Rebuild Imo administration is immeasurable. All through his life in public service, he has continued to touch the lives of thousands of people. The combination of Rt. Hon. Emeka Ihedioha and Engr. Gerald Irona as Governor and Deputy Governor of Imo State respectively is one of the best things that have happened to Imo State.

Litigations against the victory of Governor Emeka Ihedioha

People should stop wasting their time and resources. Imo people have spoken and it is final. I expect all those pursuing impossible court declarations to stop forthwith and join hands with Governor Emeka Ihedioha in rebuilding Imo.

Advice
All Imo citizens should join hands with Governor Emeka Ihedioha to rebuild Imo State. Civil Society in Imo must rise to the challenge of mobilizing citizens to participate in governance, if the state must move forward. The Governor and the Deputy Governor cannot be everywhere at the same time. It is the responsibility of citizens to raise flags whenever and wherever things are not going well, with a view to drawing their attention. The Government must consolidate on the great initiatives. Governor Ihedioha must watch fifth columnists and sycophants, so they don’t derail his administration. Citizens’ engagement should be more frequent. Having round pegs in round holes is the way to go.