Dinner At Her Place 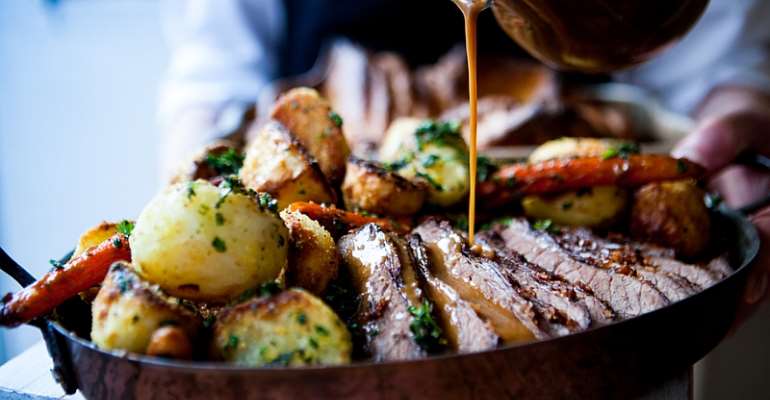 The street leading to the imposing building was curly in a manner akin to that of a snake speeding off to escape danger. Deserted as if in a desert, the rows of houses on both left and right spoke to the class of the residents. With a gracious quietude, the environment exudes a sort of lifelessness with its allurement. The lifeless impression given by the environment, was debunked by the neon lights yelling from behind the window curtains, squealing aloud the presence of probable legion.

At the gate of her residence, there was no one manning the gate. It seemed as if there was no security. About fifteen seconds at the gate, the gate yawned on its own, and without any prompting, opened up like an expectant harlot. The Acura Sports Utility Van, in which I was driving, instinctively responded, slowly crawling in as if in reluctance, into the welcoming embrace of the expansive but beautifully manicured compound.

As I stepped down from the vehicle, and strolled towards the building, I surveyed the environment, taking in the beauty and the allure of the sight. The outside stairs that leads to the terrace, designed to look like the smile of a joyous crocodile, anticipatingly salivating about a prey, was very easy to surmount.

Climbing the stairs in approach to the entrance, I stepped on the terrace, tilting the collar of my open-necked shirt and moved towards the 12 foot high wooden door. Before I could knock at the giant wooden door, which measured about six feet in width, according to my estimation, it slowly jolted ajar. Behind it was a peeping smart lady, which I later learnt has been working with my host for the last 32 years, through thick and thin.

Beaming with smiles, she greeted in an African way, showing utter respect in her posture and took my handshake with her two hands as she welcomed me into an expansive anteroom overlooking a spacious living room that could easily be mistaken for a concert hall.

My host appeared from behind a dark coloured oak door, donning a long Kaba (Yorùbá word for a gown), with beautifully trimmed sleeves endowed with wide flappy wrists. The Kaba, dull yellow in colour, provided enough brightening for dark coloured spots that enhanced the overall beauty of the clothe and edifification of the majestic personality of my host.

Ambassador Rita James was obviously excited to have me in her residence. With expansive smiles, she held my hand and led me into two adjoining smaller living rooms, choosing the inner most one, which she reasoned would be more conducive to our conversation. The living room, decorated with Victorian furniture was duly lighted by the beams of daylight and the sixteen tiny roof lights that shown like stars in the firmament of the ceiling. As the daylight receded, the ceiling acceded as star spangled, emphasizing the enchanting allure of the cozy salon.

The conversation was long and detailed. It covered all aspects of the subject matter. Then, I observed her fiddling with her handset for about 30 seconds. Five minutes after, she told me dinner was ready. She led me out of this beautiful living room into another one and then into the hall. She approached something that looked like a wall, but made to part with a touch on an almost inconspicuous handle.

Informal. Warm. Kind. Open. Vivacious. Gracious. Yet electric in her dignity. Brisk in her ways. Exuding authority without being authoritative. Commanding respect without any modicum of request for it. Real and humble without any air of self importance. Ambassador Rita was a combatant soldier who has looked at death in the face several times while she fought for the liberation of her country, and she is still standing, and still carrying a bullet in her body.

With a circumspect mien, even when effervescent, she seems ruminative. One doesn't need to seek too far to see her dedication and commitment to her country. She is patriotically patriotic. She is always talking the talk and walking the walk in her search to advance the progress of her country. She exuded a high level of sensitivity to predatory "helping hands."

She made it clear that her country needs help and that they all recognize that. "But we are not ready to reject one form of colonialism for another," she had stated as a matter of factly. She added, "We recognize we have to operate in the global milieu, but we are doing so according to our own aspirations and dreams of true freedom."

She is congenitally sensitive to matters of integrity in all her dealings. She doesn't just preach about it, she treads its thread steadily. Speaking about two Ministers who just stepped down for suspected acts of corruption in her country, she made bold to insist that, the blood of her fellow countrymen and women, the children and the elderly were not shed for such depravity. Stolidly, she condemned the sordid acts, asking what would be the worth of her sacrifices in the liberation war if leaders should pace that path of payola?

Entering the larger than life dining room, to my right immediately after the entrance, is a bowl of hot water with lemon with which I washed my hands before taking my seat at the dining table. Sitting down at the set big dining table that could have seated 24 guests conveniently, the sparklingly white linen had no creases and I wondered how that was accomplished for such a very big and expansive dining table.

I was treated to lobes of lamb, drumsticks of chicken, home made stew with a special flavour of hot pepper. The genre of rice was chefly cooked, if you know what I mean. It was a simple meal that was highly salacious and genuinely pulsating to the palate. I made a choice of white wine mixed with orange juice on the rock.

I was about commending her supposed chef who had put together such a simple but salacious meal when she informed me that she cooked the food herself! My eyes were subconsciously widened by surprise as I reflectively asked rhetorically, "You mean you really cooked this?" She reminded me that she is a mother and wife first before being an Ambassador.

A mother of two fantastic boys and an adorable daughter making waves in the advertising world in another country. The daughter, a former beauty queen of her home country, looked ravishing from the pictures that I saw. She, evidently, is another page of her beautiful, wonderful, powerful and soldierly mother. The youngest of the three and a boy, was physically present. Sharp, witty and smart. Needless to say that he was very intelligent. Or what other expectation could one have had of a child raised by a combatant soldier turned a diplomat?