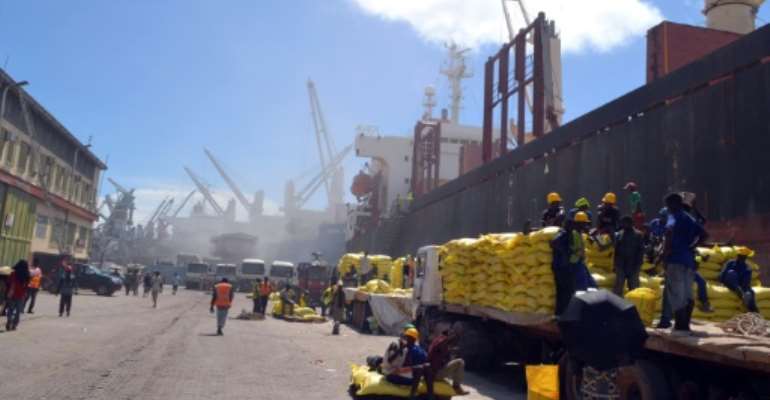 The harbour in Conakry, capital of Guinea, has been a shipping route for some minerals, but the new deal includes a deep-water port in Matakong. By CELLOU BINANI (AFP)

An Asian-backed consortium said Wednesday it had won a bid to mine one of the world's biggest deposits of iron ore, in a remote region of the West African state of Guinea.

In a statement, Societe Miniere de Boke (SMB) said it had won a government tender to exploit blocks 1 and 2 of vast iron reserves in the Simandou mountains in the southeast of the country.

The deposits have been dogged by years of controversy, including allegations of bribery.

The firm, created in 2014, says it is Guinea's biggest bauxite exporter.

A source close to the bidding process said SMB won out over Australia's Fortescue Metals Group because it had promised to export the ore through Guinea, as opposed to trucking it through neighbouring Liberia.

To do this, it promised to build a 650-kilometre (400-mile) railway line and a deep-water port at Matakong on the Atlantic coast.

The source said the consortium mentioned an investment of $10 billion (9.1 billion euros) over five years.

The Simandou deposits have been estimated at 2.4 billion tonnes of high-grade ore, which sells at a premium price as it causes less air pollution -- a major problem in China -- than lower-grade ore when processed into steel.

But exploiting the lucrative deposit has been dogged for years by the region's remoteness, squabbles over mining rights and allegations of corruption.

Mining rights that were initially awarded to the Anglo-Australian giant Rio Tinto were handed in 2008 to BSGR, a company controlled by Franco-Israeli businessman Beny Steinmetz.

A years-long legal battle ensued, culminating in an agreement earlier this year under which Steinmetz agreed to surrender any claim on mining rights while Guinea promised to drop prosecution for alleged corruption.

However, investigations into alleged bribes have been opened in Switzerland, concerning Steinmetz, and in Australia and Britain, concerning Rio Tinto.

Guinea has vast resources in raw minerals for industrial use as well as gold and diamonds, but its population of 12.7 million is one of the poorest in the world.

Despite the end of authoritarian rule in 2010, the country remains politically unstable, and deadly protests have erupted over suspicions that Conde wants to change the constitution in order to seek a third term in office.

In May, the World Bank sounded a warning of "serious negative effects" on the environment and biodiversity from mining and hydro power schemes.

On its website, SMB says it contributed $600 million to the Guinean economy last year, and its development strategy attaches "primary importance to local results of mining and its environmental consequences."