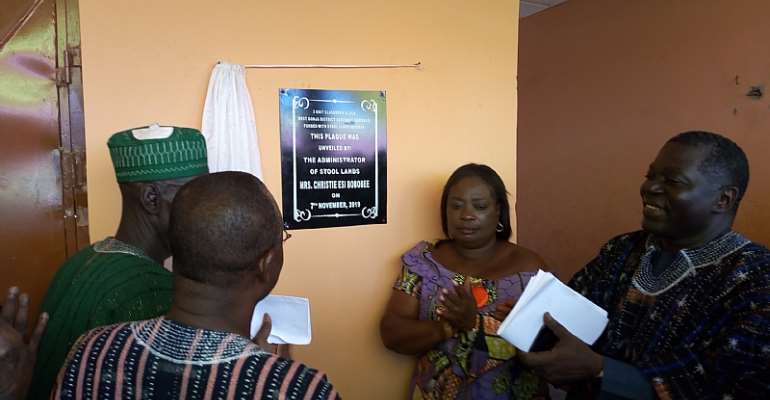 The office of the Stool Lands Commission has commissioned a 3- unit classroom block at the Falahiyat E/A Primary School in Damongo, Savannah Region.

The project, fully funded by the office of the Stool Lands Commission through royalties paid by the commission.

Speaking at a short ceremony held at the school premises to hand over the first ever project, the DCE for West Gonja District Assembly, Hon Saeed Jibril Muhazu said he was very grateful to stool lands commission for the project since the problem of pupils sitting under trees in Falahiyat E/A Primary School will become a thing of the past.

He said lack of furniture is still a bigger challenge in the district which needs to be addressed and therefore appealed to the administrator of Stool Lands to partner with the West Gonja District Assembly to supply chairs to the various schools under his outfit.

The District Director of Education for the West Gonja District, Mr Salifu Adams on his part thanked the West Gonja District Assembly and the office of the stool lands commission for such a wonderful edifice which he believes will ease congestion in the school especially during the rainy season where pupils and tutors of the school studying under trees has to join their colleagues in the other classroom blocks.

Mr Salifu further proposed a Junior High Block for the school in future and pleaded with the authorities of the school to take good care of the new block which saw the entire classroom block fully furnished.

Administrator for Stool Lands Commission, Mrs Christie Esi Bobobee noted that her outfit is very much privileged to be associated with all the projects in the Central Gonja District, Bole District and West Gonja Districts and urged all other districts to emulate same to enhanced development of education in their respective areas.

She however lamented how chieftaincy disputes is impeding the work of stool lands and advocated for peace and dialogue in solving all chieftaincy issues since there can never be development without peace.

She further assured the various assemblies that her outfit is always prepared to partner them to enhance development.

The Deputy Minister for Lands and Natural Resources Honourable Benito Owusu-Bio in his address reminded the people of the region that the ban on illegal mining is still in force and urged everybody to comply.

He also emphasized on the logging menace and appealed to the local authorities to help end the rosewood logging and charcoal burning for commercial purposes in the region.

He also assured the administrator for stool lands that his ministry will always support and partner them for development in every part of the country.