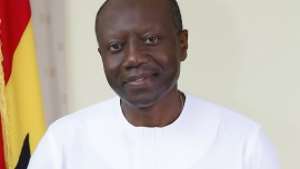 Minister of Finance, Ken Ofori-Atta says in spite of the clamour and incessant demands for infrastructural development government considers the human capital essential hence the huge investment in the educational sector.

“The past practice in which we as a government have to be responsible for all infrastructure, I don’t think it is sustainable. Our challenge at the Ministry of Finance is to find partners for infrastructure development so that we don’t compromise the issue of human capital which leads to not only the knowledge we need to build ourselves but the national cohesion and narratives of a united country,” he said

The NPP government has come under intense pressure for various infrastructure especially roads, which has dominated media headlines for several days.

The opposition party NDC has persistently argued that infrastructure with emphasis on education is imperative to complement the country’s educational progress.

Speaking on Citi News, the minister emphatically expressed that government’s topmost priority is uplifting the human resource capital and not infrastructure development.

He said the value of an educated population cannot be quantified hence the government’s investments in the education sector.

He noted that developing the “human capital is at the core of the government’s national development agenda.”

“The social justice, actually, of a citizen having access and being nationalist and patriotic, I don’t think you can put a limiting value on it,” he emphasised.

FIFA throws out SAFA’s protest case against Ghana after WC q...
1 hour ago