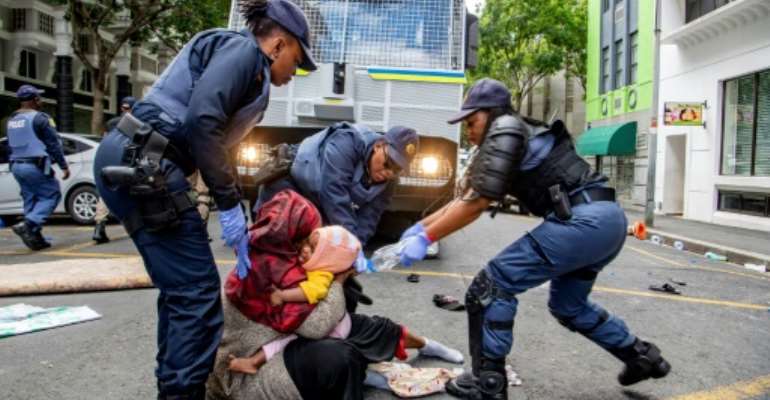 Police fired water guns and stun grenades to disperse the asylum-seekers staging a sit-in protest in the UN's Cape Town office. By - (AFP)

South African police on Wednesday arrested around 100 foreign nationals occupying an office building in Cape Town as part of a sit-in protest against xenophobia.

Hundreds of asylum-seekers have been camping at UN refugee agency offices in South Africa's capital Pretoria and the coastal city of Cape Town since October 8.

The sit-in overflowed into the building housing the UN's Cape Town office, prompting the landlord to successfully apply for their eviction.

"About 100 people have been arrested after they failed to heed the call to disperse," the police said in a statement.

"Police are... executing a court order to evict about 300 refugees and asylum seekers who have been occupying the building."

The foreigners, mainly from other African nations, say they are fed up with being ill-treated and discriminated against.

They have asked the United Nations to relocate them to another country, claiming they no longer feel safe in South Africa after a surge of xenophobic attacks last month.

Foreigners are often the first to come under fire when South Africa's chronic unemployment and inequality boils into resentment. By - (AFP)

Clashes broke out with the police as protesters refused to move from the Warldorf Arcade -- a 12-storey block of offices in Cape Town's central business district.

They banged on pots and plastic bottles, chanting "xenophobia government" and "police xenophobia".

"South Africa you (are) killing refugees", said a slogan painted on a white banner.

The situation became more subdued after the arrests. Warldorf Arcade was cordoned off and protesters started moving their belongings to a nearby church.

South Africa is home to 268,000 refugees and asylum seekers, according to government statistics. They are mainly from Somalia, Ethiopia, Zimbabwe and DR Congo.

The country boasts one of the world's most advanced asylum-seeking laws, allowing foreigners to apply for refugee status within the country itself and to work during the process.

They foreigned have said they no longer feel safe in South Africa after a surge of xenophobic attacks last month. By - (AFP)

But the United Nations has voiced concern over the more than 50,000 pending asylum claims -- the highest in sub-Saharan Africa.

Rights groups say the number of people granted refugee status has remained unchanged for the past decade, suggesting an intentional culling of foreign national acceptance.

As the continent's most industrialised economy, South Africa is also a magnet for migrants seeking better job prospects.

Seen as competing with locals for jobs, foreigners are often the first to come under fire when South Africa's chronic unemployment and inequality boils into resentment.

Xenophobic violence left at least 62 dead in 2008. Seven people were killed in 2015 and 12 died in the latest spate of attacks this year -- most of them South African. The incidents occurred mainly in the Johannesburg area.