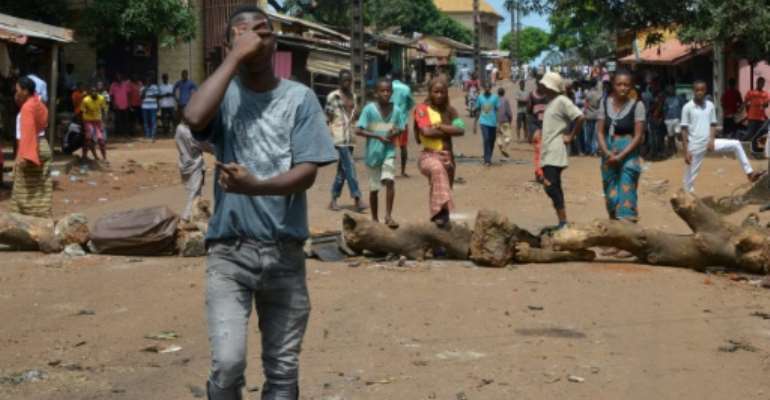 Demonstrations have been held in Guinea against constitutional reforms that critics say aim to let President Alpha Conde run for a third term. By CELLOU BINANI (AFP)

The prosecutor in the trial of eight Guinean opposition leaders accused of organising protests against President Alpha Conde that have turned deadly said he was seeking maximum sentences of five years in prison for seven of the accused.

The defendants were arrested on Saturday and charged with making statements that disturbed public order by calling for demonstrations against Conde's push for constitutional reforms that critics say aim to let him run for a third term.

At the packed hearing, held under high security in the capital Conakry, prosecutor Sidy Souleymane Ndiaye asked that seven out of the eight should each be sentenced to five years and fined two million Guinean francs (194 euros).

He asked for the eighth to be released.

Defence attorneys have previously said the men would plead not guilty as the prosecutors have no proof they disturbed public order by calling for peaceful protests.

It was not clear when the court might reach its judgement.

The eight belong to an alliance of unions, political parties and civil society groups called the National Front for the Defence of the Constitution (FNDC) which formed in April and has appealed for a massive turnout in rallies.

The prosecutor said the call amounted to a "call to insurrection".

The opposition says at least 10 people have died in clashes during protests this week. The government late Wednesday put the death toll at nine, along with "many injured".

Authorities say the protests are illegal because they were not given formal permission.

Watchdog Human Rights Watch called for an end to the government crackdown.

It said authorities had "effectively banned street protests for over a year, citing threats to public security", adding this had escalated in recent days.

"A blanket protest ban, the arbitrary arrest of civil society leaders, and the violent dispersal of demonstrators shows that the government is prepared to trample on human rights to suppress dissent," it said in a statement.

"Human Rights Watch has documented at length the police and gendarmes use of firearms and excessive use of lethal force when policing past protests, as well as the beating of protesters, corruption, and other forms of criminality."

Conde has in the past drawn criticism over the police's deadly use of gunfire to quell demonstrations. About 100 people have been killed since he came to power, according to the opposition.

Last month, the Guinean leader called on the public to prepare for a referendum and elections, raising speculation that he was planning to overcome the constitutional ban on a third term in office.