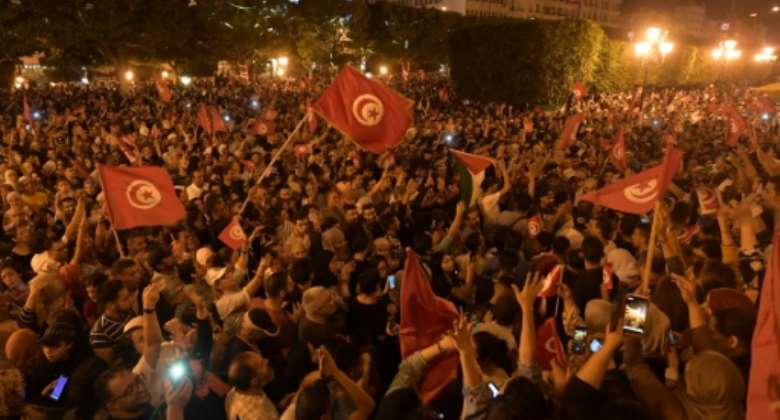 Behind the landslide victory of conservative political outsider Kais Saied in a runoff presidential vote were millions of young voters, who describe him as a leader worthy of their trust as Tunisia's democracy takes root.

According to a poll by the Sigma polling institute, around 90 percent of voters aged 18 to 25 voted for political newcomer Saied, massively shunning his rival, business tycoon Nabil Karoui.

"In the first round, I didn't think he would win. But now that he has won I can truly believe in the transparency of our elections," 20-year-old law student Mayssa Jlassi told AFP.

"We had to everything possible to mobilise all young people like me to vote en masse" for Saied, she added.

Jlassi joined a volunteer group that went door-to-door, with very modest means, to canvass for votes for her candidate.

According to Sigma's data, Tunisians were sharply divided by age group.

The older the voter, the more likely his or her ballot went to Karoui, who swept up 50.8 percent of the over-60s' votes.

"The main reason for (Saied's) victory was the extraordinary mobilisation of young people aged 18 to 25," said Olfa Lamloum, director of the Tunis branch of the NGO International Alert, which works closely with young people.

According to Sigma, 37 percent of young voters cast their ballot for Saied in the September 15 first round -- twice the national average -- while the disparity was magnified further in Sunday's runoff.

This time was different.

Saied "managed to win the trust of young people... not with promises but by offering answers to the failures of representative democracy", Lamloum told AFP.

The anti-establishment Saied is seen as uptight and unwavering, and beneath his austere style is a commitment to socially conservative views that many young people reject.

But he has said he will respect the social freedoms enshrined in law in recent years that civil society groups have hailed as freedoms.

And what his young supporters see in him above all is an honest leader who is offering them the keys to building Tunisia's future.

Saied has promised "to challenge the top-down nature of power and to change the rules of the game of politics, which are the root cause for the exclusion of young people", Lamloum said.

For his acolytes, Saied represents "the promise of real democracy, dignity, and a break from a political class that is disconnected from the people and which is obsessed with power and its privileges", she added.

The incoming president has, in recent years, "established a strong relationship of trust with young people, by meeting them across the country, thus building for himself a circle of young people who ran his campaign for him", sociologist Mohamed Jouili said.

French-language daily La Presse welcomed "a rekindling of interest among young people, from north to south Tunisia, in voting".

Ultimately, it was this shift that decided the vote, "and that's great", wrote M'hamed Jaibi in an editorial.

Turnout was 55 percent on Sunday, while just half of voters cast their ballots in the first round. The October 6 parliamentary vote saw fewer voters still.

Young people signed up to vote in an intense registration campaign. Those aged 18 to 35 now account for 63 percent of voters, official statistics show.

The electoral commission has yet to release detailed official indicators of the turnout among young voters, but all the signs appear to show it was higher than in any of Tunisia's previous free elections.

On voting day, thousands of young people mobilised, many of them spontaneously, to organise carpools to go to polling stations.

Increase farm gate price of cocoa to GHS1k per bag for farme...
54 minutes ago