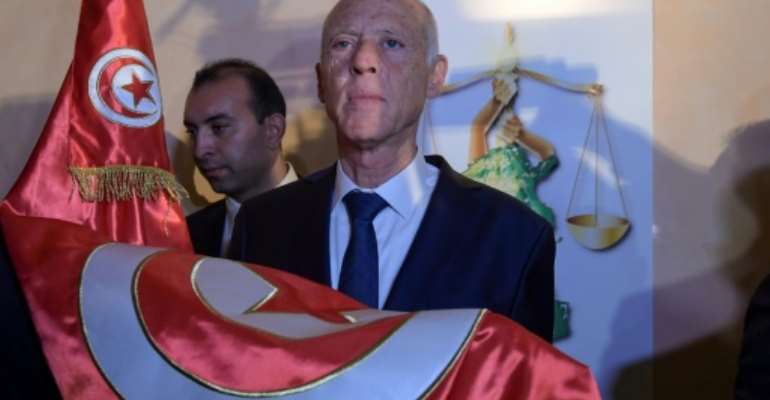 Tunisia's electoral commission was expected to confirm Monday that voters gave conservative political outsider Kais Saied a sweeping mandate to be the next president, thanks largely to young people who flocked to his side.

In a contest that reflected Tunisia's shifting post-revolution political landscape, Saied, an independent, scooped up more than 70 percent of the vote, polls showed -- sweeping aside his rival, charismatic media magnate Nabil Karoui.

With his three million estimated votes, Saied won double that of all 217 lawmakers combined who were elected in October 6 general elections.

This win "is a message to parliament," Kharrat added. "Voters have opted for a plan to clean up politics, fight corruption, and give more power to local entities."

Official results were set to be announced at 7:00 pm (1800 GMT), according to the electoral commission ISIE, which reported turnout was at least 58 percent, a steep rise from the first round.

Saied, a retired law professor with a rigid and austere demeanour that earned him the nickname "Robocop", was carried to victory by young voters, wooed by his anti-establishment platform.

Around 90 percent of 18- to 25-year-olds voted for Saied, according to estimates by the Sigma polling institute, compared with 49.2 percent of voters over 60. 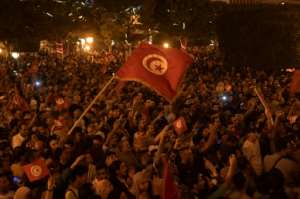 In his first reaction, Saied thanked the country's young people "for turning a new page", and vowed to try to build "a new Tunisia".

Thousands of people took to the streets of the capital Tunis late Sunday to celebrate Saied's victory, honking horns and singing the national anthem.

The runoff pitted Saied against another newcomer, businessman Karoui, who has been dubbed Tunisia's "Berlusconi".

Karoui had been jailed for the majority of the campaign, only walking free on Wednesday after more than a month behind bars on suspicion of money-laundering. He has dismissed the charges as politically motivated.

Saied and Karoui both trounced the old guard in a September 15 first round, highlighting voter anger over a stagnant economy, joblessness and poor public services in the cradle of the Arab Spring.

The poll, Tunisia's second free presidential election since its 2011 revolt, followed the death of president Beji Caid Essebsi in July.

Saied, a 61-year-old constitutional law expert, campaigned on the values of the 2011 revolution, based on opposition to Westernised and corrupt elites, and in favour of radical decentralisation.

He supported Saied because he thought he embodied "the will to cut ties with the old system and to revive the hope that had been buoyed by the revolution". 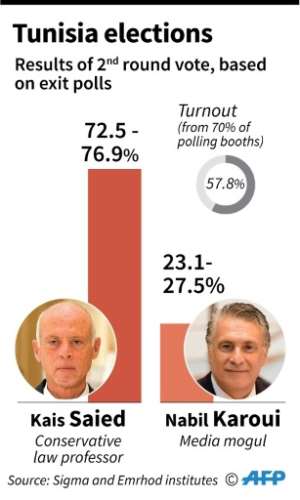 Tunisians took to social media, many voicing pride in a successful democratic process.

"Congratulations to Tunisia... for showing a continued commitment to resolving differences via peaceful transitions," said H.A. Hellyer, a senior fellow at the Royal United Services Institute in London, in a tweet.

The Islamist-inspired Ennahdha party, which won the most seats in parliament in the general elections, had called on supporters to back Saied.

While the candidates were both seen as anti-establishment figures, the contrast between them was sharp.

A social conservative, Saied has defended the death penalty, criminalisation of homosexuality and a sexual assault law that punishes unmarried couples who engage in public displays of affection.

Karoui presented himself as a candidate for the poor whose appeal stemmed largely from his media empire and philanthropic activity.

While his arrest cemented his outsider status, he had been a longtime key supporter of president Essebsi, with ties to the political establishment.

For Kharrat, what set the two finalists apart was primarily a difference of "moral principles".

"Karoui represents a leading political class that is dishonest and uses money for its own personal interests," he said.

Karoui however called the election result a "denial of justice", saying he had been penalised by his incarceration.