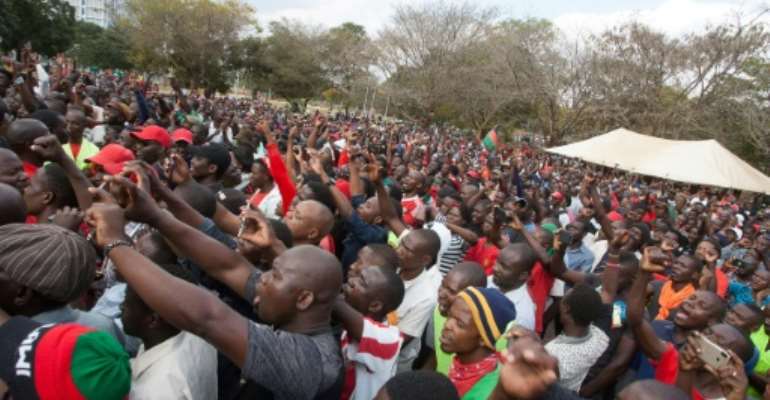 Demonstrations have been held since the May vote in Malawi returned President Peter Mutharika to power. By AMOS GUMULIRA (AFP/File)

Four Malawian protesters have been charged with the murder of a policeman who was stoned to death during clashes between pro- and anti-government demonstrators outside the capital Lilongwe, police said Saturday.

A wave of protests has gripped Malawi since disputed elections in May, and Superintendent Usumani Imedi was killed on Tuesday trying to restore order as violence erupted at Msundwe, a trading outpost west of the capital.

The clashes broke out as a group of protesters attempted to stop supporters of the ruling Democratic Progressive Party from travelling to President Peter Mutharika's first rally in the city since his election win.

The police also arrested 40 others following Imedi's death and charged them with endangering the lives of road users.

All the suspects, except one juvenile, appeared before a magistrate in Lilongwe on Friday.

Since the May vote, protesters have been demanding the resignation of electoral body chief Jane Ansah for her handling of the election, which the opposition says was marred by irregularities.

Many of the protests have descended into violence and numerous anti-government protesters and civil society leaders have been jailed.

On Friday night a protest leader from the Human Rights Defenders Coalition (HRDC), Timothy Mtambo, was shot at while driving home.

"The bullets burst the back tyre and front tyre on the driver's side but he managed to control the car and he drove to safety," Mtambo's colleague Reverend MacDonald told AFP.

"It shouldn't be happening in a democracy where tolerance and dissenting views are the benchmark."

Foreign embassies including Britain, Germany, Ireland, Japan, Norway and the US have condemned the spate of violence that has gripped the southern African nation since the election.

The UN rights agency's spokesman Rupert Colville joined in the calls on Friday, urging "meaningful dialogue" and restraint from security forces and protesters.

"We remind the Malawian authorities of their obligation to respect the rights of freedom of expression and peaceful assembly, and to distinguish between violent actors and peaceful demonstrators," Coleville said.