Finalists in Tunisia presidential runoff to face off in TV debate 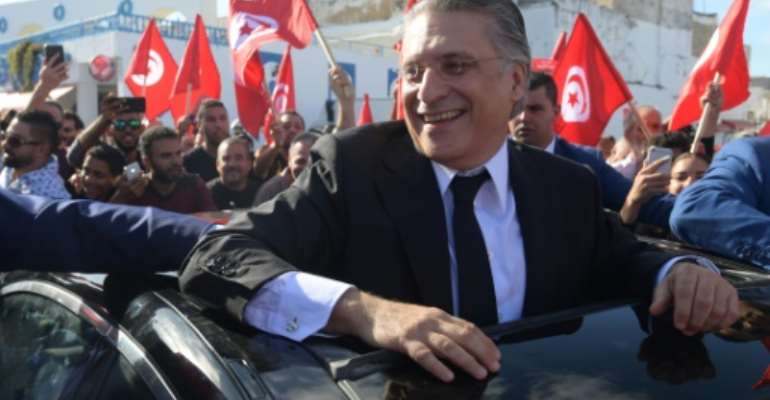 The frontrunner in Tunisia's presidential election runoff will go head-to-head Friday night against his rival in a rare and highly anticipated televised debate just two days ahead the vote.

Political newcomers Kais Saied, 61, an independent conservative academic, and business tycoon Nabil Karoui, 56, won through the first round of the poll in September, sweeping aside the country's post-Arab Spring establishment.

An expert on constitutional affairs, Saied topped the first round with 18.4 percent of votes while Karoui came in second with 15.6 percent, out of a field of more than 20 candidates including seasoned politicians.

The debate ahead of Sunday's final vote comes just days after Karoui was released from jail, where he had been held since August in connection with a probe into money laundering and tax evasion.

Tunisia's Le Temps newspaper said the 2000 GMT debate, which will be broadcast on most channels, as well as by some foreign television stations, would be "decisive".

The face-to-face debate, a rare event in the in the Arab world, "will enable Tunisia's seven million voters to know who merits their trust", added Al Maghreb newspaper.

The stage will serve as a much needed platform to woo voters in a country grappling with a stagnant economy, high unemployment, failing public services and rising prices. 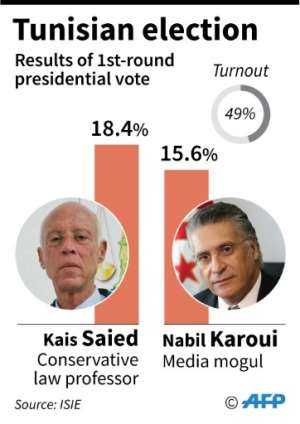 Last week Saied, an austere upstart nicknamed "Robocop" because of his rigid demeanour, said he was putting his campaign on hold in order to avoid an unfair advantage over Karoui who lingered in jail.

Karoui, who said the allegations against him were politically motivated, had until now campaigned by proxy through his wife and his Qalb Tounes (Heart of Tunis) party.

The debate will be "more interactive" than the three nights of debates between the 26 hopefuls who stood in the first round of voting in September, said one of the organisers, Belabbes Benkredda.

The showdown will kick off with an introduction of each candidate, after which Saied and Karoui will be given time to answer a set of questions. They will then be allocated time to respond to each other. 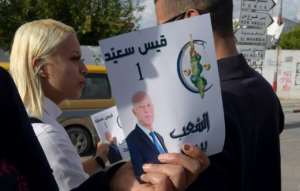 Volunteers distribute photos of Tunisian conservative academic and presidential candidate Kais Saied who has called for giving back "power to the people". By FETHI BELAID (AFP)

Although both are seen as political outsiders, they are very different from each other.

Saied is seen as uptight and unwavering but beneath his stern style lies a commitment to socially conservative views and a desire to radically decentralise Tunisia's political system.

He has called for giving back "power to the people" and pledged to bring an end to corruption, echoing some of the slogans of the 2011 revolution that ousted autocrat Zine El Abidine Ben Ali.

Saied has shunned mass rallies and focused instead on door to-door canvassing for votes.

The flamboyant Karoui, always seen dressed in designer suits with his salt-and-pepper hair slicked back, has presented himself as a candidate of the poor.

He burnished his reputation with a charity show on the Nessma channel he founded with his brother after the revolution, in which he trekked across the country reaching out to the needy and handing out aid.

Karoui is a shrewd politician, according to Alaa Talbi, president of the Tunisian Forum for Economic and Social Rights.

"The man knows what he is doing, he has seen that via television and philanthropy he can enter into every marginalised home," Talbi said.

As campaigning wrapped up on Friday, Karoui visited his hometown of Bizerte in northern Tunisia where he received a hero's welcome and planned to rally in central Tunis in the afternoon.

Saied's supporters also prepared a rally in the capital but said the frontrunner would not be present.

Last Sunday, Karoui's chances of courting voters got a boost from parliamentary elections.

Qalb Tounes came in second with 38 seats, behind the Islamist-inspired Ennahdha party which won 52 out of 217 seats in the national assembly -- far short of the 109 needed to govern.

But his legal woes are not over.

Although he remains a free man, Karoui is still under investigation for fraud and banned from travelling abroad.

But if he wins Sunday's runoff, Karoui will "receive immunity... and all the legal proceedings against him... will be suspended until the end of his mandate", constitutional law professor Salsabil Klibi told AFP.