In Nairobi, recycling poo is cleaning up the slums 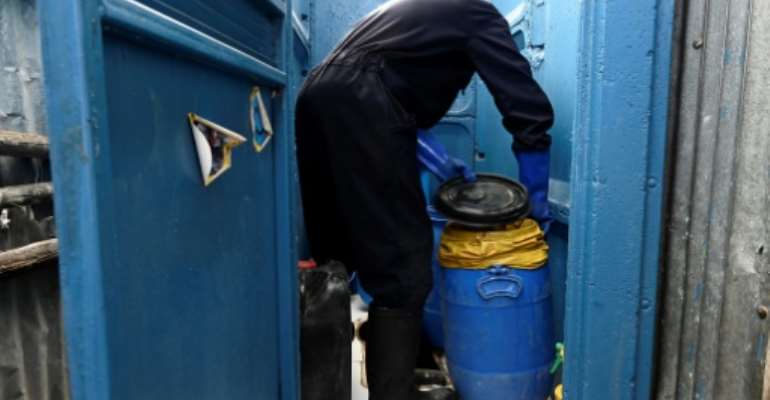 An expanding fleet of eco-friendly lavatories in the Nairobi slum of Mukuru is helping cut down on people throwing their waste out of the window in a bag. By SIMON MAINA (AFP)

"When I started, there was poop in bags everywhere," said Ricky Ojwang, skillfully navigating a rubbish-strewn canal in Mukuru, a Nairobi slum where he's worked to improve sanitation since 2012.

"People would use bags because there were no toilets, and they would throw them out the window. The slum was a mess."

Less of these "flying toilets", as they're locally known, befoul the cramped alleyways of Mukuru these days, thanks in part to an expanding fleet of eco-friendly lavatories managed by Ojwang and his team.

More than 100,000 people use the ubiquitous blue-and-yellow latrines every day, says Sanergy, the enterprise behind the sanitation scheme.

Instead of being flung out the window, the waste collected from these toilets is taken to a facility outside Nairobi and recycled into fertilisers, with other products under development.

It's an innovative approach to a multi-pronged challenge confronting city planners, not just in Kenya but around the globe: slum populations are projected to mushroom from one billion today to three billion by 2050, says UN Habitat.

Sanergy, an enterprise trying to improve sanitation in the Nairobi slum of Mukuru, says the waste is collected and taken to be recycled into fertilisers. By SIMON MAINA (AFP)

Mukuru has roughly one public latrine for every 547 households, and very few are connected to sewers, concluded a 2017 report on the slum by Kenyan and international researchers, including a team from UC Berkeley.

"You could imagine the process you'd have to go through to lay a sewer in a place that densely populated. It's virtually impossible. You have houses literally every three metres."

Population estimates vary considerably for Mukuru, from hundreds of thousands to more than half a million.

The informal settlements are densely packed onto a narrow strip of land in East Nairobi.

So Sanergy uses waterless toilets instead, which don't rely on sewers and are far cheaper to erect among the nooks and crannies of Mukuru's dense alleyways.

In the dead of night, sanitation teams safely remove the human waste in sealed barrels and spirit it away using wheelbarrows to negotiate Mukuru's uneven back-alleys.

Sanergy uses waterless toilets, which don't rely on sewers and are cheaper to erect. By SIMON MAINA (AFP)

Some of the cost is born by the community under a franchise model.

Residents pay about $8.50 (8 euros) a month for the toilet, regular cleaning and waste collection, or landlords cover the cost on their block.

Georgina Mwende, a 25-year-old mother, shares her toilet with four other households in the cramped Mukuru block where she lives.

Before, she was apprehensive about using the public toilet, which are few and far between and in her case a reeking wooden shack down a dimly-lit warren: "It wasn't nice... You couldn't use it at night," Mwende added.

By 2022, Sanergy expects a million Nairobians to be using their toilets.

Sanergy transforms waste from Mukuru into a safe organic fertiliser that is sold on to farmers. By SIMON MAINA (AFP)

But they envision their model reaching urbanites the world over, with sights set on booming cities in Africa and Asia by the middle of the next decade.

"We view ourselves as a solution for cities, and not just Nairobi," Lwoyelo told AFP.

"We are reducing the burden on government to be able to provide sanitation."

In Kenya, like many emerging economies with fast-growing cities, public spending on sanitation lags far behind need.

Access to clean sanitation in Kenya grew just five percent between 1990 and 2015, the World Bank said in a February 2018 note.

Sanergy says that at current rates, it would take Kenya 150 years to deliver complete coverage.

Poor sanitation is estimated to cause 432,000 diarrhoeal deaths every year across the globe, the World Health Organization says. By SIMON MAINA (AFP)

Despite the light-hearted name, the "flying toilets" -- like all forms of open defecation -- are more than just a smelly eyesore.

Poor sanitation is estimated to cause 432,000 diarrhoeal deaths every year across the globe, the World Health Organization says, and is a drag on economic growth.

The majority of Nairobi's faeces flows untreated into the environment, a problem across the country. The World Bank says six million Kenyans still defecate outdoors.

A host of eco-initiatives are tackling this problem at both ends -- not just cleaning up human waste, but turning it into something useful.

The Umande Trust, a local enterprise, has been turning poo from schools and slums into clean cooking gas.

Sanivation, another waste-to-fuel outfit, has converted human excrement in Kakuma, a refugee camp in northern Kenya, into clean-burning briquettes for stoves.

At a treatment facility outside Nairobi, Sanergy has been transforming waste from Mukuru into a safe organic fertiliser that is sold on to farmers.

By the end of next year, they will have broken ground on a site capable of processing 200 tonnes of solid waste a day.