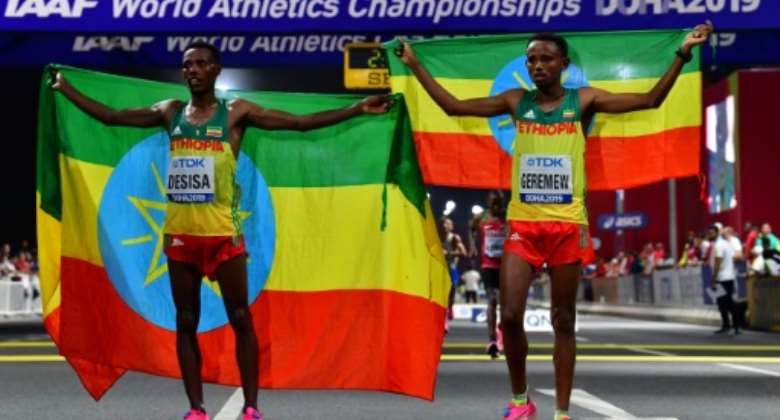 At the halfway point, all six of the leaders were from Africa, and Ethiopians were first and second across the line while a Kenyan picked up bronze following the midnight event.

"We just came here to celebrate our athletes, from Laban Korir on, they're our Kenyans! We want to make them feel at home," said Cornelius Bor ahead of the race which finished in the early hours of Sunday.

Kenya's Amos Kipruto, who won bronze in the Men's Marathon at the 2019 IAAF Athletics World Championships in Doha, told AFP his countrymen 'gave me morale'. By Giuseppe CACACE (AFP)

Nearby another group of men chanted and danced in unison, draping the Kenyan colours over an advertising hoarding.

"This medal I dedicate to all my fans in Doha," he said. "When I win, Kenyans win."

Many other migrant workers turned out in force to support runners from their native countries at the event which saw Ethiopia's Lelisa Desisa win gold in two hours 10 minutes 40 seconds.

'We feel at home'

Kenyans make up roughly 30,000 of Qatar's 2.6 million population and are often employed as security guards while Ethiopians number around 25,000 according to official statistics.

Kenyans were among a number of nations whose embassies in Doha handed out free tickets to their citizens following dismal crowds in the championships' opening days.

"We feel at home," said Bor, a security officer.

Even more African supporters would have been able to attend if not for the tournament's late start times, often after 10:00 p.m. (1900 GMT) for finals, according to some diaspora members.

Even more African supporters would have been able to attend the Men's Marathon at the 2019 IAAF Athletics World Championships in Doha if not for the tournament's late start times. By Giuseppe CACACE (AFP)

"They put it at night and guys are working. At night time I don't think they made it. A few people (did), but not too much," said Wilson Mwenji, a former runner from Nairobi resident in Doha for four years, as he prepared to watch the women's marathon on September 27.

But Mercy, another Kenyan living in Qatar, said the championships had been "very well organised" as she walked past the main track venue, Doha's Khalifa stadium.

"I love the fact that it is in the city and security is very amazing too. Kenya have been doing great, we got a gold medal for the men's 3,000m steeplechase," she told AFP. "It's been great."

International Association of Athletics Federations president Sebastian Coe has said he wants to ensure athletics are "not just rooted in a handful of European capitals" -- but the flagship event has never been staged in Africa.

Athletics and road races in particular are hugely popular on the continent and have fewer barriers to entry compared to other sports.