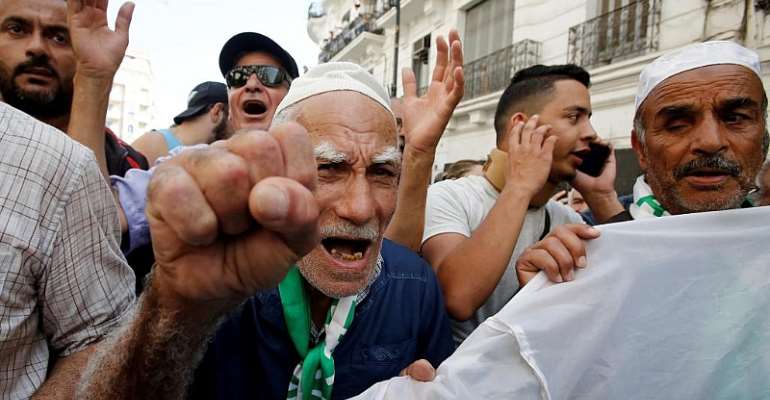 On Saturday 5 October 2019, Algeria commemorates the 31st anniversary of the Black October riots, which saw thousands of youths take to the streets to call for change. Three decades later, the seeds of unrest remain the same.

This year's anniversary takes place against a backdrop of ongoing protests in Algeria, which in April swept away the country's long-standing leader, President Abdelaziz Bouteflika.

The seeds of the latest unrest were planted in 1988.

"5 October is an important date in the mindset of Algerians," comments Zoheir Rouis, national secretary of opposition party Jil Jidad, which translates as "New Generation".

"It represents the desire for change among youths aged between 15 and 20, who took control of several towns to cry out their demands for freedom and democracy," he told RFI.

The causes of the rioting were largely economic. More than half of Algeria's people are under 21 years old, and complaints centred on high inflation and unemployment.

However, many also had deep contempt for the President Chadil Bendjedid and the ruling National Liberation Front party.

No democracy, no economy
"In 1988, multipartism didn't exist," continues Rouis.

"There was just one party, the FLN, which had been in power since 1962.  And there was a clampdown on all forms of expression and freedom. So when Algerians saw the regime, they saw its failure to give them democracy and a stable economy for them to live correctly," he told RFI.

With no sign of economic progress in sight, the youth, most of them from low-income neighbourhoods took to the streets to advocate their basic human right – an equal chance to succeed in life.

The army responded with violence and some 500 people were killed, and 1,000 others wounded.

The riots, the worst since Algeria's independence from France, triggered the fall of the North African country's one-party system in February 1988.

But the honeymoon period was short-lived.
Illusion of democracy
"The regime took advantage of this democracy or semi-democracy to redeploy itself and tighten its grip on power," comments Rouis.

In 1991, the Islamic Salvation Front Party (FIS) was on the verge of winning Algeria's parliamentary elections and defeating the ruling FLN.

But after the first round of polls, the government cancelled the elections and banned the FIS.

The move triggered a wave of violence, known as the "Black Decade", which pit the government against Islamist rebel groups. About 200,000 Algerians lost their lives.

When the violence subsided, Abdelaziz Bouteflika took over as president. But for Rouis, he only promised more of the same.

"For 20 years, Abdelaziz Bouteflika did nothing but clamp down on all forms of expression. And when you have the same causes you have the same consequences. Thirty-one years on, Algerians are again out on the streets, because their demands have not been met," he says.

Cross-generational movement
Since February, there have been weekly gatherings on Tuesdays and Fridays in Algeria, sometimes amassing to crowds in the tens of thousands.

The protests have also been echoed here in France.
On Sunday, members of the Algerian diaspora will again gather to show their solidarity with their compatriots back home.

"This Sunday, there will be a march from Place de la République to Place de Stalingrad further east to commemorate the events of 5 October 1988," explains Rouis.

"We want to highlight that our struggle for democracy is not over.

"In 1988, it was young people demonstrating. Today, it is still young people. Those who were 20 at the time now are 50. Now we have two generations coming together for this quest for democracy," he said.

Weekly protests forced veteran president Bouteflika to stand down in April, but demonstrators are still demanding a more thorough overhaul of the ruling system.

They have rejected the army's call for an election in December, saying any vote that takes place while the old guard is still in place cannot be considered fair.