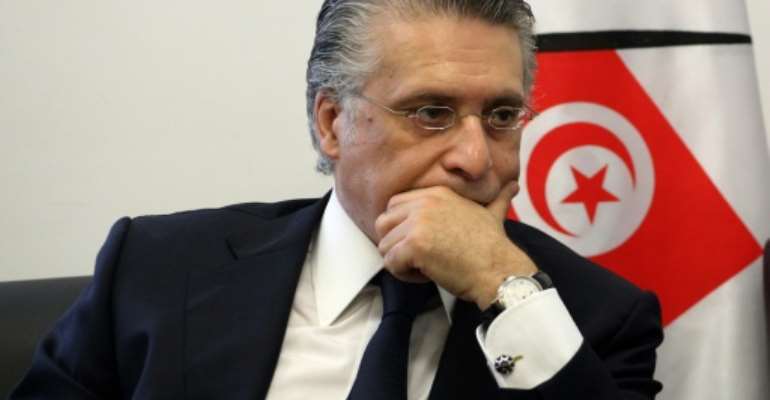 Media mogul Nabil Karoui was placed in pre-trial detention on August 23 on charges of money laundering and tax evasion. By Hasna (AFP/File)

The publication by US authorities of a $1-million international lobbying contract to promote a jailed frontrunner in Tunisia's presidential election has triggered an uproar in the North African country.

The US Justice Department published a copy of the deal with Canada-based Dickens and Maddison to lobby for imprisoned media mogul Nabil Karoui "in the United States, the Russian Federation, the United Nation... in order to attaining the Presidency of the Republic of Tunisia".

The document, first published by the Al Monitor news site, was inked three months after Karoui formalised his candidacy and just days before he was arrested on August 23 on charges of tax evasion and money laundering.

It is signed by the firm's president Ari Ben Menashe -- who describes himself as a former Israeli intelligence officer -- and pledges the company will "strive to arrange meetings with the Honourable Donald Trump" and Russian President Vladimir Putin.

The company will also work "to obtain material support for the push for the Presidency", the contract says.

Tunisia's electoral commission ISIE capped campaign spending at 1.7 million dinars ($630,000) for the first round of the presidential vote on September 15 and 1 million dinars in the lead-up to the final runoff on October 13.

Karoui came in second in the first round with 15.6 percent, behind independent law professor Kais Saied.

In the run-up to key legislative polls on October 6 and the final presidential vote a week later, the publication of the contract has sparked a firestorm on Tunisian social media pages.

Lawmaker Issam Chebbi called on "all institutions to fulfil their responsibilities", in a post directed at ISIE to enforce spending limits.

Several requests for Karoui's release to campaign fairly have been rejected by Tunisian courts.

Other Tunisian political leaders have hired international lobbyists, according to US justice department documents, but for smaller amounts.

The BCW consulting firm said in August that Ennahdha had paid it $7,500 for help in "contacting media and policymakers", including several state department officials.

Public relations firm Burson-Marsteller, part of BCW, said in February the party had paid a total of $200,000 to lobby US officials and journalists.