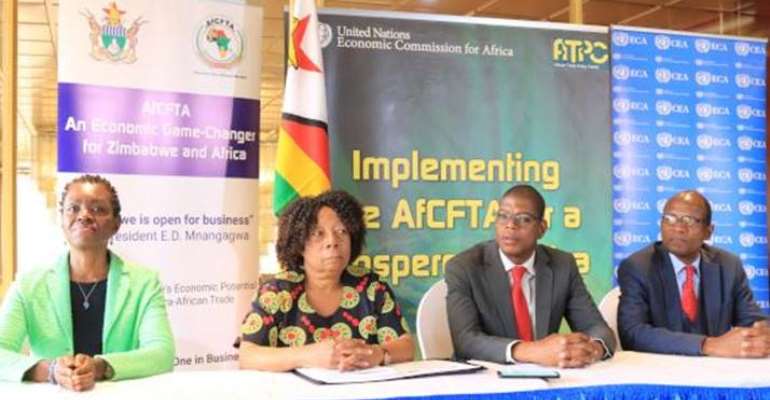 The United Nations Economic Commission for Africa (ECA) and the African Union Commission (AUC) on Wednesday assured Zimbabwe of continued technical support in assisting the country in its efforts to develop a national strategy to benefit from the African Continental Free Trade Area (AfCFTA).

In remarks during the opening session of a two-day validation workshop of Zimbabwe’s national AfCFTA strategy, Mr. Batanai Chikwene, a Programme Management Officer with the ECA, said the organization was willing and prepared to support the government and people of Zimbabwe in their economic development process.

“The ECA through the UN system in Zimbabwe will continue to support the government of Zimbabwe in its economic transformation and development agenda,” he said, adding the national strategy being reviewed for validation was a product of thorough research and consultation, and provided key and far reaching recommendations on the way forward for Zimbabwe in implementing the AfCFTA.

The success in implementing the AfCFTA strategy, which is aligned to key regional initiatives, depends on the implementation of key policy documents on which the strategy is anchored, said Mr. Chikwene.

The draft identifies six strategic objectives for the country;

- To develop a cohesive and efficient common national approach to continental and regional integration;

- To expand exports of goods and services and widen access into African markets;

- To enhance Trade facilitation and the business environment;

- and empowering women and youth in both the formal and informal sectors.

“Zimbabwe’s national AfCFTA implementation strategy, like another policy documents will not implement itself. We have to invest heavily in execution and implementation. The government will have to provide an environment in which exporters and importers can do business and set up firms that can compete globally,” said Mr. Chikwene.

He added: “The importance of ensuring coherence among fiscal policies, monetary policies, industrial policies and trade promotion initiatives is critical and cannot be overemphasised. Ongoing efforts to implement key economic reforms are a step in the right direction and should be commended. And, results from such efforts are beginning show.”

“It’s now up to the private sector to embrace this great initiative and play to win. The goods you export to other African countries will have to compete with products from all over the world, it is therefore critical that you build globally competitive firms,” the ECA expert said.

He said it was refreshing to note that the expectations of government on the role that the private sector will play in the implementation of the AfCFTA were clear. In his State of the Nation Address Tuesday, Zimbabwe’s President Emmerson Mnangagwa said in partnership with the private sector, his government envisaged to derive maximum benefit from the operationalisation of AfCFTA.

“This is a clear demonstration of government’s political will to implement the agreement. The ball is now in the private sector court,” said Mr. Chikwene.

He added the effective implementation of the AfCFTA strategy will require government, the private sector and other trade support institutions to work together.

“All the actors involved in the implementation of the strategy must pull in the same direction. This is why we believe that the proposal by the private sector for the creation of a formal platform in the form of the AfCFTA national implementation committee is critical and must be supported.”

Mr. Chikwene said; “As we discuss the strategy I would like to urge all stakeholders to think critically on how we can increase the participation of women and youth in the trade sector. The approach the country will take in scheduling the commitments in some of the priority sectors that have been identified under the AfCFTA trade in services negotiations can help Zimbabwe became a regional and transport hub.”

He also thanked the European Union for its support for the AfCFTA project.

For her part, the AUC’s representative at the workshop, Ms. Beatrice Claudia Chaytor said the AUC also stands ready to continue to support Zimbabwe in its AfCFTA implementation efforts.

“We will continue to partner with UNECA in this support and look forward to taking forward the work that arises from the national implementation strategy,” she said, adding the agreement was expected to be transformative.

“This workshop to validate the findings of the Zimbabwe national strategy on AfCFTA is a direct response by the government of Zimbabwe to obtain the best possible outcome from the agreement, which bodes well for the successful implementation by Zimbabwe of the AfCFTA. To succeed, one has to plan well, and Zimbabwe has started to plan well for success in the AfCFTA. This national strategy provides pointers for the way in which Zimbabwe public and private sectors can make use of the AfCFTA for the benefit of the businesses and the people of Zimbabwe.”

The AfCFTA is intended to be a key driver of integration, production and industrialisation, employment creation, income generation and poverty reduction on the continent.

FixingTheCountry Movement to march in support of Akufo-Addo'...
49 minutes ago