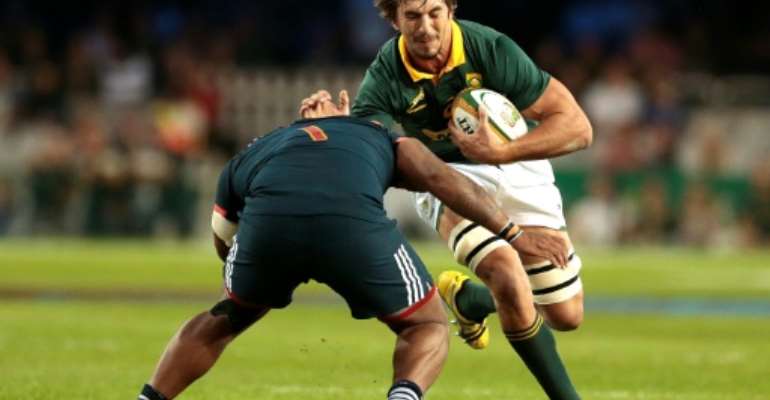 The Springboks have opened an internal probe into Eben Etzebeth over allegations of assaulting and racially abusing a homeless man just before the World Cup. By GIANLUIGI GUERCIA (AFP/File)

SA Rugby said Thursday it would launch an "internal process" over the matter after South Africa's Human Rights Commission announced it was taking the case to court.

Etzebeth, 27, allegedly insulted, assaulted and pointed a gun at a 42-year-old homeless man in Langebaan, a seaside resort about 120 kilometres (75 miles) north of Cape Town in August.

The 81-Test second row, who has denied the allegations, was named in South Africa's squad for the World Cup in Japan just a day after the claims surfaced on social media.

"SA Rugby reaffirms its commitment as a good corporate citizen to abide by any requirements placed on it or its employees by South African authorities," SA Rugby said in a statement on Thursday.

"Following our discussions with the South African Human Rights Commission, we have instituted an internal process to address the matter, the details of which remain an employment matter between SA Rugby and the player," it added.

The Human Rights Commission announced it would "institute legal proceedings against Mr. Eben Etzebeth in the Equality Court" on Friday.

Despite the controversy, Etzebeth looked happy at the eve-of-match training at Ecopa Stadium, leading the squad onto the pitch wearing a cap and a large grin.

His first-up stretching was done with skipper Siya Kolisi, the two seemingly in deep conversation and apart from the rest of the 31-man squad before being called in for group passing drills.

"To be honest, I don't know what's really happening," said Kolisi. "I think SA Rugby issued a statement this morning... I know Eben is playing this week."

Asked whether the giant second-rower had been affected by developments, Kolisi said: "No, not from what I'm seeing. We've just been preparing for the game.

"Every game for us is now a play-off game because if we slip up we're out of the competition."

Assistant South Africa coach Mzwandile Stick also said the focus was entirely on the match against Italy, the winner of which will likely advance to the quarter-finals.

"I'm not going to lie to you and say we know much about what's happening with the case back in South Africa," Stick said.

"At the moment, we're in the World Cup and as coaches and players we're just focusing on making sure that we get the team into the right space.

Etzebeth, who has signed to play for Top 14 giants Toulon after the World Cup, was interviewed by Human Rights Commission officials before flying out with the South African squad.

The commission said it would meet the complainant on Thursday to take further instructions.

The commission will also hold a public meeting on Thursday in the town. "The community are demanding justice," said Jones.

He also said the commission will approach the country's police service to ask it to look into claims of bias against a police officer who initially investigated the matter.