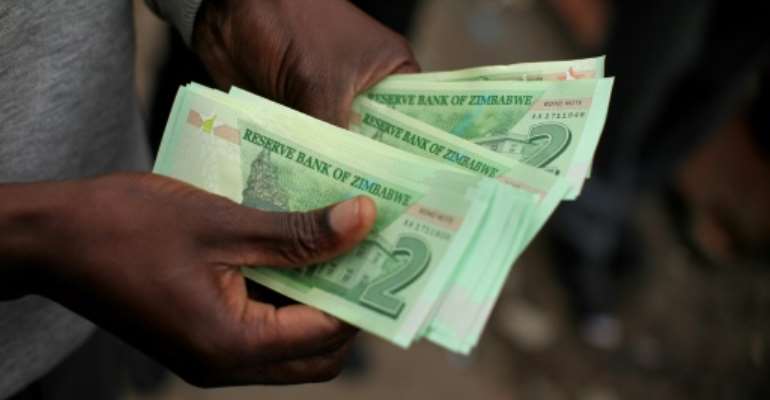 A man holds "bond notes" equivalent to US dollars released by the Reserve Bank of Zimbabwe to ease critical cash shortages. By Wilfred Kajese (AFP/File)

Years of economic crisis have left the country short of banknotes and commercial banks have had to ration cash withdrawals.

As a result, many people use their cellphone to carry out electronic financial transactions -- and when they need cash, often go to the office of their mobile phone provider where they can get banknotes in exchange for a hefty commission.

On Monday the Reserve Bank of Zimbabwe shut down cash transfers via mobile money services.

It accused "some economic agents" of illegally exploiting the facility by charging exorbitant commissions -- often more than 40 percent.

Hyperinflation in 2009 forced Zimbabwe to ditch its own currency for the US dollar. By Jekesai NJIKIZANA (AFP)

But in a statement on Wednesday, the bank said it had boosted its monitoring mechanisms to prevent the "abuse of payment system" and had re-established the service.

The ban had affected millions of innocent customers "instead of identifying the abusers and dealing with them on a case-by-case basis," it said.

The ruling is expected on Friday.

President Emmerson Mnangagwa, who took over from the late Robert Mugabe in 2017, has promised to revive Zimbabwe's sickly economy. By Michael Owens (GETTY IMAGES NORTH AMERICA/AFP)

But many people say they are worse off now under his government than under Robert Mugabe, whom he replaced in 2017.

Inflation reached nearly 300 percent in August, according to International Monetary Fund (IMF) figures, stoking fears of a return to the hyperinflation of 2009 that forced the country to ditch its own currency for the US dollar.