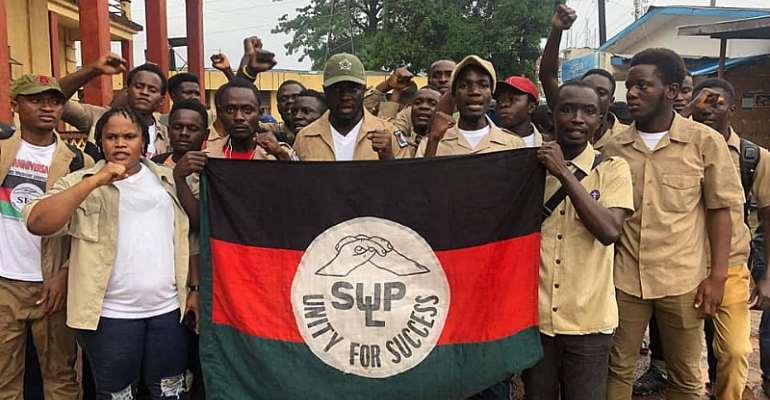 SUP strongly condemns the perpetual ban on student political activities on the campuses of the University of Liberia. It can be recalled that the Administration of the University of Liberia temporally banned students’ political activities on June 3, 2019 for the second times in less than three months.SUP considers the ban unjustifiable and undemocratic, and therefore vehemently contends such illegal decision and dictatorial practice by the University Administration and the National Government.

Comrades, On January 11, 2019, the Administration of the University of Liberia unjustifiably banned all students’ political activities on the campuses of the University of Liberia without any investigation, stakeholders’ engagement, or prior notice to our institution (SUP). SUP then resisted it through a legal and radical approaches and the ban was finally lifted on February 24, 2019.

With an extreme dismal, barley three months after the January 11 ban was lifted, the UL Administration again placed another ban on students’ political activities on June 3, 2019. This unjustifiable ban prohibits students from assembling, holding or engaging in any political-related activities on any of the University of Liberia campuses. SUP sees this as a clear deprivation of our right to peacefully assemble and associate as guaranteed by Article 17 of the 1986 Constitution of the Republic of Liberia, Article 19 & 20 of the 1989 Universal Declaration of Human Rights, Articles 21 & 22 of the 1976 International Covenant on Civil and Political Rights, Articles 10 & 11 of the African Chapter on Human and People’s Rights and the 2012 UL Students Handbook.

SUP sees this as a flagrant violation of fundamental human rights and wants to warn the UL Administration and the government of President Weah against the reincarnation of Doe and Taylor’s dictatorial and autocratic tendencies; SUP has never succumb to any oppressive regime and dictators. We want assure the student populace of the University of Liberia that SUP will use all means available to restore their right to assemble and associate and their right to speak out freely.

Additionally, SUP calls on all students of the University of Liberia not to sign any behavior bond that imposes the newly drafted students’ Handbook of the University on them. The new students’ handbook is unconstitutional and must not be accepted by the students till those provisions that are in contradiction of the Organic law of Liberia are revised.

While the Administration still consider the ban effective, several students grouping has conducted some political activities on the campuses of the University of Liberia with the acquiescence of the Administration. On July 13, 2019, the University of Liberia Students Transitional Committee was inducted into office with the support of the Administration, and on August 9, 2019, the University conducted elections that brought on board the leadership of the Centennial Graduating Class and said leadership was again inducted into office on September 29, 2019. These activities clearly violate the purported ban on students’ political activities as students were seen campaigning politically, wearing political party uniforms or shirts, chanting of battle cry in the presence of the UL Administration even though the ban prohibits those actions. We therefore see this ban as a direct target to silence our institution from speaking against critical issues that affect the University and the State.

If arms carrying Charles Taylor could not ban student’s politics why can such be practiced under an atmosphere of political civility especially in the regime of a person who once considered Charles Taylor as dictator. If this is not dictatorship, then President Weah needs to inform the World what it is under his administration as President of Liberia.

The 29th Central Committee of SUP extends the mandate of Cde. Mohammed Deygbo as Chainman with immediate effect. On August 28, 2019, constitutional majority of the 29th Central Committee of SUP expelled Cde. Carlos T. Edison as Chainman and member of SUP on four counts and mandated the Co – Chair Party Affairs, Cde. Mohammed Deygbo to preside as Chairman and take the Party to Congress in thirty days. The initial publication by the UL Administration regarding the resumption of Classes on September 16, 2019 was taken into consideration by the Central Committee; unfortunately, the School did not open as plan by the Administration. Therefore, the Central Committee hereby extends the mandate of Cde. Mohamed Deygbo for additional thirty days beginning today as the Congress Preparatory Committee (CPC) and the Election Commission set the final stage for General Congress.

In the mist of pressing economic challenges, SUP officially welcomes all students of the University of Liberia back to school for the 2019/2020 first semester. Currently, the Nation is challenged politically and economically and those challenges are spilling over the education sector. SUP wants to inform the students that the University is challenged and those challenges may impede academic activities this semester. There is a persistent delay in the salary and benefits of instructors, low budgetary support to the University, lack of internet connectivity as well as busses to commute students from one point to another, unstable electricity supply, unhygienic learning environment, among others. SUP admonishes all students of the University especially freshmen students to take their lesson seriously in the mist of the daunting challenges that exist at the Institution.