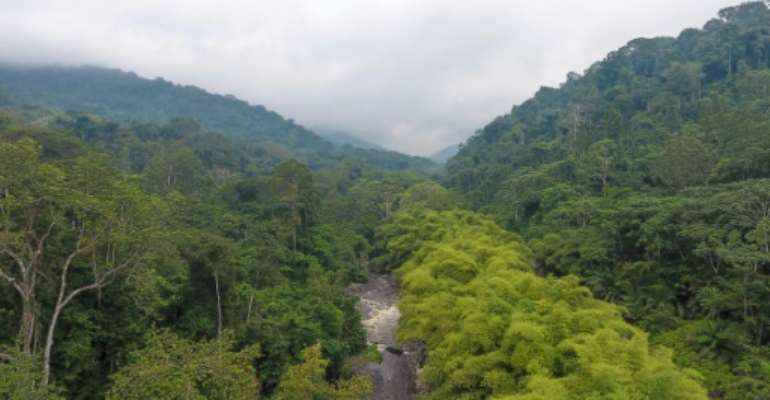 Green Gabon: The small Central African country is a rare jewel -- 90 percent of its area is covered by forest. By - (Ageos/AFP)

The lush green canopy stretches over the Akanda National Park -- one of the many forest jewels that Gabon is fighting to conserve.

But those living in poverty in the shadow of the park are ambiguous.

They see the forests less as a global treasure to be cosseted and more as a resource that they need to use to survive.

A bank employee, making his arduous daily commute to the nearby capital Libreville, glanced up at the immense trees almost with hostility.

"I've lived here for two years and I can tell you that I have no electricity and no water," said the man, dressed in a business suit as he walked along an earthen road to get to work.

"Gabon's forests are a source of national pride, but you can't be proud and live without a roof over your head."

But the fight against climate change spurred little enthusiasm among local people who spoke to AFP.

A retired cook, Luc Boudzanga, said he had no pension. To get by, he had to grow food on land where such activities are banned.

"We eat thanks to the forest," Boudzanga says before heading off along the edge of the park, machete in hand. "Otherwise, how would we survive?"

It is not just poor people who eye the forest as a resource -- loggers and miners, too, argue that the trees and the mineral-rich land below deserve to be used, a position fiercely opposed by green campaigners.

Faced with these competing pressures, the government has to perform a tightrope act.

Under the 10-year deal signed on September 22, Gabon -- which is still almost 90 percent covered in forest -- will become the first African country to be paid for reducing greenhouse gas emissions to fight climate change.

Norway will pay Gabon $10 for every ton of carbon not emitted, relative to the Central African country's annual average between 2005-2014, and up to a maximum payout of $150 million over 10 years.

The country's forestry minister is British-born Lee White, who rose to prominence as a feisty environmental campaigner, and then as a spell as former director of the national parks.

He took office after a scandal erupted over a huge, illegally-logged haul of kevazingo, a rare tropical hardwood.

The Norway agreement is a reward for Gabon's environmental efforts, White said in an interview with AFP in New York.

"They will pay us because we have not deforested, and because we've managed logging responsibly, and reduced emissions linked to logging," said White, a British and Gabonese national, speaking in French.

White said the emphasis is to encourage smarter, greener practices among forestry companies that he says produce 80 percent of Gabon's carbon dioxide emissions.

"If we can reduce the width of roads, cut trees in a direction that minimises damage, reduce the size of bulldozer tracks, and boost forestry rotation periods, we can take lots of steps to reduce emissions," he said.

Gabon's government has to juggle between competing demands to conserve the forests and exploit them. By Steve JORDAN (AFP)

Lee stressed enforcing the law to "wipe out illegal exploitation" of the forests.

But, in an olive branch to loggers, he said that seized stocks of kevazingo, a highly expensive wood prized by furniture makers, would be auctioned.

After that, White said, he hoped to re-authorise legal logging of kevazingo as early as next year, or in 2021.

Measures to deal with illegal logging have been boosted by the Gabonese Agency for Space Studies and Observation (AGEOS), which since 2015 has been linked up with the satellites of several other agencies with eyes on the forest.