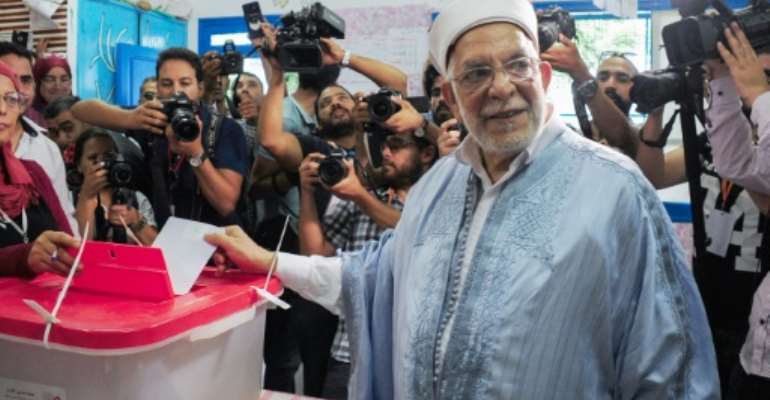 Snubbed by voters in the first round of Tunisia's presidential election, the Islamist-inspired Ennahdha party must overcome an "identity crisis" to secure its political future in upcoming legislative polls, experts say.

Last week saw the first round of the country's second free presidential elections since the 2011 ouster of autocrat Zine El Abidine Ben Ali, who died in exile days after the poll.

It was the first time Ennahdha has contested the presidency, putting forward as its candidate interim speaker of parliament Abdelfattah Mourou, who is seen as a moderate and advocates more openness in the party.

That compared with 1.5 million votes won by Ennahdha in 2011 in the country's first free election, for a constituent assembly, that marked the party's political comeback.

Ennahdha was not alone in its recent setback.

All the candidates who have been at the forefront of the political scene in recent years, such as Prime Minister Youssef Chahed, were also knocked back in the first round.

The vote reshaped the political landscape, as two outsiders came out ahead, having campaigned against the system: constitutional law professor Kais Saied and imprisoned media mogul Nabil Karoui.

After failing to reach the presidential run off, the stakes are high for Ennahdha in October 6 legislative polls.

In an attempt to entice its base, on Friday the party pledged its support for Saied, who is considered socially conservative and siphoned off many of its votes, particularly among young Tunisians.

Ennahdha "could not support Nabil Karoui because it has already been accused by its base of having worked within the system to the detriment of its principles," said political scientist Slaheddine Jourchi.

Ennahdha governed as part of a coalition with the Nidaa Tounes party, which Karoui helped found and which won 2014 elections on an anti-Islamist platform but later splintered.

For political scientist Hamza Meddeb, the decline of Ennahdha can be explained by internal conflicts within the movement over its direction.

By participating in the coalition and "acquiescing to neoliberal economic policies" that did not lower unemployment or prices, Ennahdha "lost its ability to activate socioeconomic reform and anticorruption arguments to rebuild its legitimacy and support base", Meddeb said in a report for Carnegie Middle East Center published in early September.

Since Ennahdha made the "landmark" decision in 2016 to "abandon preaching and focus on politics" the party has experienced "an identity crisis", he said.

By focusing on building support on a foundation beyond religion, Ennahdha must now regain legitimacy by positioning itself as "an effective governing force and propose viable policy solutions to Tunisia's social and economic challenges", he added.

As an indication of its internal shake up, Ennahdha -- one of Tunisia's most structured parties, where disagreements rarely surface -- in recent months has seen a series of resignations and public challenges to its candidate choices for the legislative and presidential elections.

Lotfi Zitoun, advisor to the head of Ennahdha Rached Ghannouchi, announced his resignation in July, a decision triggered, according to local media reports, by a conflict over the strategic choices of the movement.

Zoubeir Shehoudi, former director of Ghannouchi's cabinet, also resigned, calling for the departure of the old guard and lamenting that "Ennahdha, now a normal party, integrated in the system and mechanisms of the state, has become incapable of finding social and economic solutions."

In view of the fact that 15 to 20 percent of pro-Ennahdha youth did not vote for Mourou, Ghannouchi, himself a candidate in a heavily disputed Tunis constituency, has called for mass mobilisation for the October legislative vote.

Ennahdha hopes to keep its 69 seats in the 217-seat parliament.

The change in the electoral calendar to bring forward the presidential election after the death of president Beji Caid Essebsi posed an extra challenge.

The presidential poll pushed the legislative elections, for which Ennahdha is better armed, into the background.

And this vote, three weeks after the first round of the presidential election, could see voters reinforce the first-round anti-system choices.

"Maybe Ennahdha will lose big... maybe the party will even lose its position at the heart of power," said Jourchi.