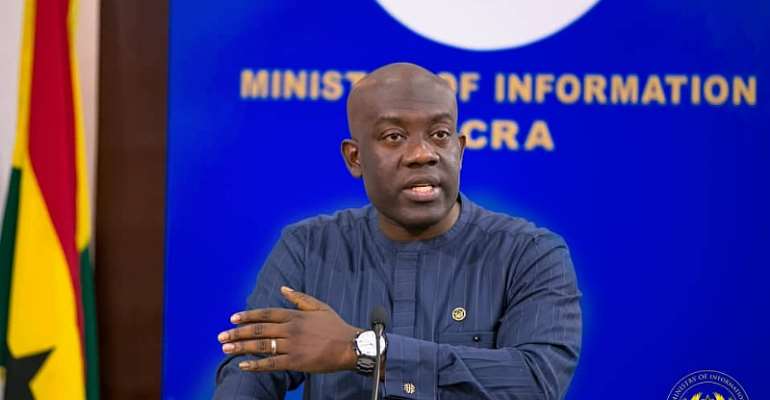 The Ministry of Finance will later this week serve notice to the Auditor General to challenge an audit finding which has made its way into the public domain.

According to the Minister of Information, Kojo Oppong Nkrumah, this move by the Finance Ministry follows US$1million payment being made to Kroll and Associate firm without evidence of work done.

Briefing the media at a Meet-The-Press on Wednesday, Kojo Oppong Nkrumah said "The said finding was published in the Auditor General’s report on the account of Ministries, Departments and Agencies (MDAs) for the period ending 31, December,2018. Indeed, the report itself concedes that information on this transaction was requested from the Ministry of Finance (MoF) by the Auditors."

The Ministry of Finance (MOF) in turn says it will get details from the office of the Senior Minister since that was the appropriate office that executed the transaction.

Hon Oppong Nkrumah also added that the Auditor General is said to have gone public the finding as though it is a concluded non-negotiable fact.

"The Constitutional practice is that the report is submitted to Parliament and affected MDAs invited to respond," he added.

The MoF believes that at least if this constitutional path was followed, it would have had the opportunity to respond at the next legally appropriate forum and explain as follows:

II. The office of the Senior Minister responded to the MOF query to the effect that since September 2017, Kroll has been working with the GOG to undertake extensive and thorough investigations of allegations of wrongdoing, and providing evidence of assets recoveries for possible prosecution.

III. The finding to the effect that there is no contract or that there is irregularity in the documentation that no work has been done is wrong.

It is emerging that the MoF would have wanted to go to Parliament and explain itself but since the Auditor General has gone public, it is obliged to explain to Ghanaians even before the chamber to clear the wrong impressions.

The Ministry of Finance says it wishes to encourage Ghanaians to follow due process as the transaction is backed by a well-chronicled agreement.

"There is evidence of work done. There are no irregularities in documentation as the MOF will address all these properly with the necessary documents," the Information Minister added.