By Marthe BOSUANDOLE with Albert KAMBALE in Goma 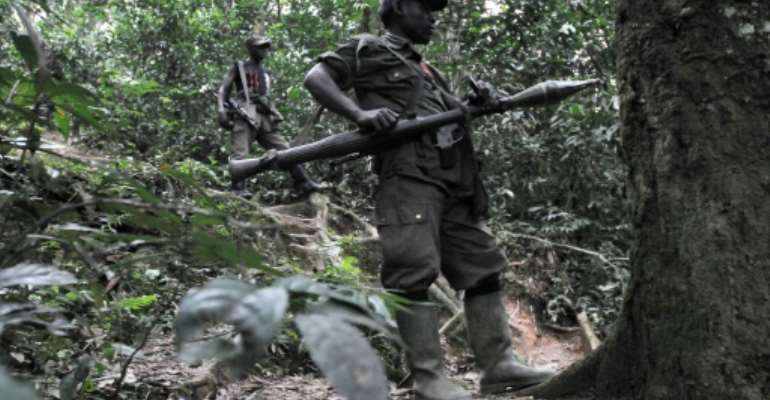 FDLR fighters are scattered across the eastern DR Congo provinces of North and South Kivu as well as in southern Katanga, and is regularly accused of committing atrocities against civilians in the zones it controls. By Lionel HEALING (AFP/File)

A Rwandan Hutu rebel leader wanted by the International Criminal Court on war crime charges has been shot dead by the Congolese army, a DRC military spokesperson said on Wednesday in what Kigali called "good news for peace".

Mudacumura, wanted for charges including rape, torture and pillage, was killed about 60 kilometres (37 miles) from the capital of the province Goma.

"The death of Sylvestre Mudacumura is good news for peace and security in the region," Rwandan state minister for regional affairs Olivier Nduhungirehe told AFP.

"With his genocide group, the FDLR, he was destabilising DRC, killing Congolese and Rwandans."

The FDLR was created by Rwandan Hutu refugees in eastern DRC after the genocide of Tutsis by majority Hutus in Rwanda in 1994.

According to the United Nations, the force numbers between 500 and 600 active fighters.

They are scattered across the mineral-rich eastern Congolese provinces of North and South Kivu as well as in southern Katanga, and the group is regularly accused of committing atrocities against civilians in the zones it controls.

"His death confirms the commitment of President Felix Tshisekedi in fighting negative forces and will open a new era of good and peaceful cooperation between DRC and countries in the region," Nduhungirehe said.

The FDLR, opposed to the current Rwandan government, has not launched any large-scale offensive in Rwanda since 2001.

Warning to other warlords

Eastern DRC has been torn for more than two decades by armed conflicts fed by ethnic and land disputes, competition for control of a wealth of mineral resources and regional rivalries.

Mudacumura's death "is a strong signal for other rebels," said General Richard Kasonga, spokesman of the Congolese army, calling it a "big step" in the fight against insecurity and terrorism.

He called on "all armed groups to lay down their arms, or face the same fate as Mudacumura."

During a visit to the region early this month, UN Secretary General Antonio Guterres also called on the rebels to disarm.

US researcher Jason Stearn said the death was "an extremely important event", telling AFP that the FDLR is "one of the biggest armed groups in the region, even if they have diminished in capacity."

However, Stearn, of New York University's Congo Research Group, held out little hope for peace in a region where around 130 armed groups remain active.

"We have seen a lot of commanders die without the groups necessarily disappearing or diminishing in force," he said.