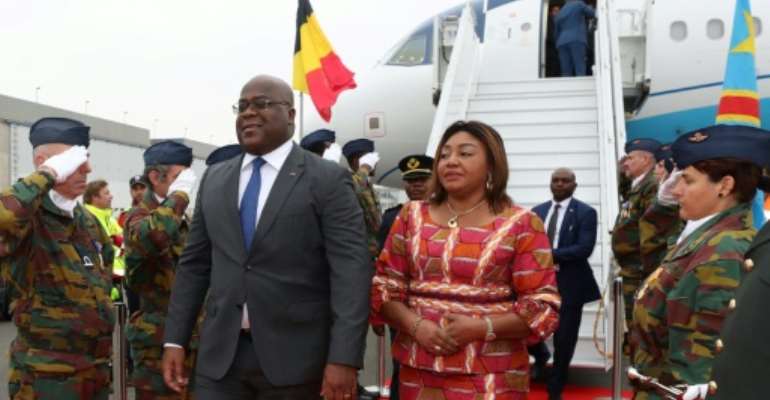 Democratic Republic of Congo's President Felix Tshisekedi and his wife Denise arrive for an official visit in Belgium at the Melsbroek military airport.. By Benoit DOPPAGNE (POOL/AFP)

DR Congo President Felix Tshisekedi arrived in Belgium late Monday on his first official visit to Europe, aiming to normalise relations with the former colonial power which were strained under the vast African nation's previous leader's refusal to step down.

Tshisekedi travelled to Washington in April where he met with US Secretary of State Mike Pompeo.

But this trip to Belgium marks his first time in Europe since being declared, on December 30, 2018, the winner of the presidential poll in the Democratic Republic of Congo.

He is set to have lunch on Tuesday with Belgium's king and queen before making a speech at the Belgian Enterprise Federation (FEB) in Brussels.

On Wednesday he will make a "working visit" to Anvers in north Belgium for a meeting with representatives of the diamond industry.

His landlocked nation is rich in natural resources including diamonds, uranium, timber and gold but chronic instability has hindered CAR's development and around three-quarters of its 4.6 million inhabitants live in poverty, according to the World Bank.

On Thursday Tshisekedi is scheduled for talks with the outgoing European Commission chief Jean-Claude Juncker.

Belgian Foreign Minister Didier Reynders said the DRC leader's visit aims to "gradually" re-establish relations which have been hurt by ex-president Joseph Kabila's refusal to step down when his mandate ended.

Kabila finally gave up his position in August 2018, but after the election his party maintained a majority in parliament and his partisans hold key posts in Tshisekedi's government.