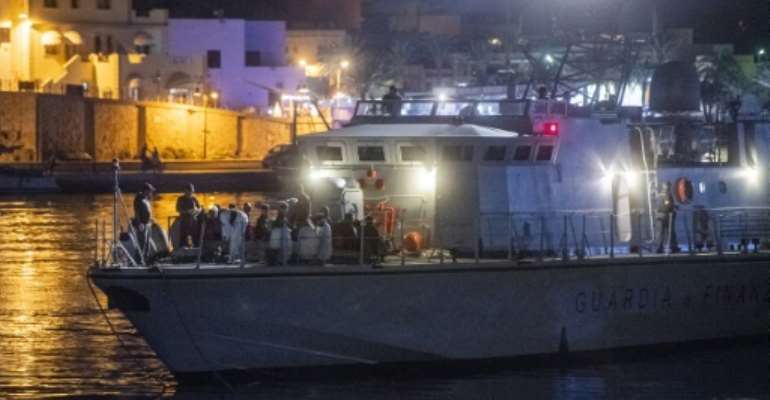 Italian authorities identified and carried out medical checks on the African migrants after they disembarked overnight on southern island Lampedusa after more than six days at sea. By Alessandro SERRANO (AFP)

Charity rescue vessel Ocean Viking was on Sunday preparing to return to rescuing shipwreck survivors off Libya after disembarking 82 migrants in Italy following a reversal of government policy in Rome.

Italian authorities identified and carried out medical checks on the sub-Saharan African migrants after they disembarked overnight on southern island Lampedusa after more than six days at sea.

"After disembarkation, the Ocean Viking should head back to her search and rescue mission in the Central Mediterranean, because people continue to die in these waters where no rescue ship is currently present in the area," Nicola Stalla, the vessel's search and rescue coordinator, said on Saturday.

European leaders are trying to thrash out an automatic mechanism that would see rescued migrants who are brought to Italy or Malta swiftly redistributed around Europe.

It is not yet clear how many countries will sign up to the scheme.

Italy and Malta say that they bear disproportionate responsibility for migrants making the perilous Mediterranean crossing as they are the closest European Union states to Libya, from where they mainly depart. 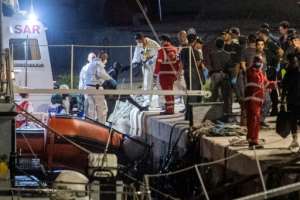 A reversal in government policy in Rome saw 82 migrants allowed to disembark in southern Italy after more than six days at sea aboard a charity rescue vessel. By Alessandro SERRANO (AFP)

Italian Prime Minister Giuseppe Conte is expected to discuss the plan with France's President Emmanuel Macron when the latter visits Rome on Wednesday.

It will then be studied in more detail at a meeting of interior ministers on September 23 in Malta, ahead of a European summit in October in Luxembourg.

According to intelligence reports cited by Italian media on Sunday, an estimated 5,000-8,000 migrants are waiting to leave Libya via the Mediterranean.