Being a young communist in contemporary France 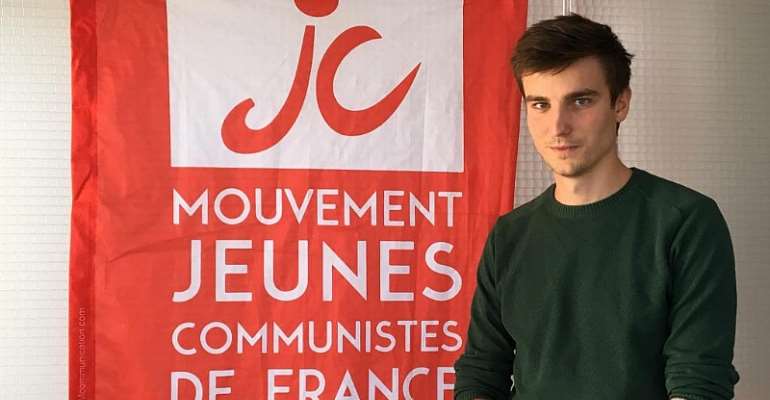 The fall of the Berlin Wall three decades ago marked the beginning of the end of communism in Europe. But the French Communist party continues to attract young people to its ranks. The head of the French Young Communists Movement talks about the fight for social justice and a greener future.

“My family aren't communists but they gave me some values and one of those values was the desire for justice,” says Leon Deffontaines. “One of the biggest injustices in the world is man's exploitation of man.”

The 23-year-old secretary general of the French Young Communists Movement (MJCF) knows his Karl Marx. He began soaking up The Communist Manifesto at the age of 14 and developed a taste for talking 'bout revolution.

But his activism dates back to 2012 when he saw workers from the Goodyear tyre factory in his home town of Amiens take to the streets to protest job cuts. They failed, and the factory was closed in 2014.

The closure had a big impact on him.
“It was the biggest factory in the city, and a lot of workers were very angry because Goodyear was making a lot of profit,” he remembers. “When I saw what I'd read about really happening on the streets, I was revolted.”

One year later, aged 16, he joined the French Communist Party (PCF). He remains passionate about defending workers' rights, including their right to a share in company profits.

In his view, Bernard Arnault, France's richest man, owes his fortune to the workers.

“Arnault doubled his fortune in one year from €45 billion to €90 billion, and paid not a penny of tax in France," according to Deffontaines. "When we're in a context where Macron says we don't have enough money to pay for the welfare state and we need to work longer, it's a joke.”

Life after Stalin
Defending the working class has been a constant for the French Communist party and its youth wing since it was founded in 1920.

But the dark side of communism: Stalin, gulags, mass killings, secret police, the imprisonment of intellectuals... has tainted the party's image.

As one columnist wrote scathingly in the right-wing French daily paper, Le Figaro: “Communism is a corpse, but still walking, alas!" describing the continuing existence of the party as "shameful".

Deffontaines recognises that “there were mistakes in the past, and we have to learn from them,” but says the young generation of communists also feel disconnected from Stalin and the dark years of the Cold War.

“I was born in 1996 so the Cold War is history. When I was young I didn't live in fear of nuclear war, so it's different,” he says. “New generations are very interested by communist ideas and values, more than Stalin.”

Fighting to improve capitalism, not destroy it

“We fight against society but we live in society," says Deffontaines. "I live in a normal house, we don't want to live in the forest without capitalist production."

There's no question of boycotting the products of capitalism or its services, even if, like Uber or cheap textiles made in China, they may involve exploitation.

“The only things I boycott are products made in Israel." This is part of the party's support for the Boycott, Disinvestment and Sanctions campaign. But otherwise, you know we have a table, a chair, those are products of capitalism. We fight not for the destruction of capitalism, we fight to improve it."

While only 10 communist MPs sit in the French parliament, there are 7,000 regional and town councillors, including 800 mayors. "Communists have an impact at local level," says Deffontaines, "they can change things".

He cites the fight for free public transport and education, and more social housing. As a youth movement MJCF demands more student accommodation in particular, especially in Paris where, Deffontaines claims, "only four percent of students have access to student housing.

"Paris is very expensive, there's nothing to rent for less than 700 euros a month, so it's becoming impossible to live in Paris.”

The rising cost of living in the capital is having an impact on MJCF membership. While the numbers are more or stable at 10,000, the movement is becoming less urban.

“Ten years ago it was essentially a Parisian movement or in big cities like Bordeaux, Lille,” says Deffontaines. “Eighty percent of the organisation was in Paris. But today it's 25 percent.”

Membership has grown in rural areas and small towns, especially “in the north where lots of young people are unemployed”.

MJCF opened a branch in Ardennes near the Belgian border in January this year and it already has 50 members. “They're very young but very interested in communist ideas.”

However scary the word communism may be for some, Deffontaines is adamant the name must stay.

And they will be doing just that at this weekend's annual Fête de L'Huma "singing La Jeune Garde - the youth version of the L'Internationale".

Founded by communist newspaper L'Humanité in 1930 as a way of raising funds and getting new members for the party, it pulls in as many as 500,000 people over the three days.

Many come for the music, but it remains a kind of showpiece for leftist ideology and solidarity.

“For us, it's the most important event of the year to get new members,” Déffontaines says with a smile.

They diverge however on the issue of nuclear power, considering that, for the moment, nuclear energy still has a place in reducing greenhouse gas emissions.

“We believe making profits and saving the planet isn't compatible,” he says. “So when we see demonstrations all around the world to save the planet, to say capitalism is destroying our planet, that's very interesting.

"We can discuss with them, we have the same values, the same demands. The new generation is the generation of the end of capitalism.”

A version of this story first appeared in the Spotlight on France podcast. Subscribe on iTunes or Google podcasts.