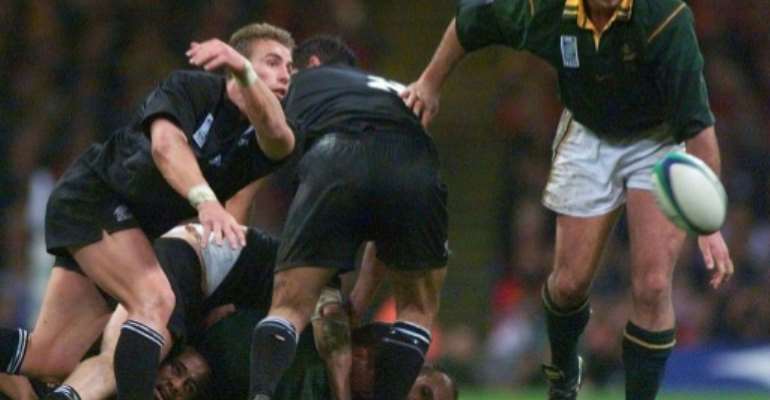 As a member of the South Africa team that won the 1995 World Cup and was later immortalised in the Clint Eastwood film "Invictus", Mark Andrews is already assured of a place in rugby history.

"We were just out of isolation, Mandela was the new president, it was an opportunity to show the world who we were," Andrews told AFP.

South Africa had been released from sporting exile, prompted by years of apartheid government, in 1992 and Andrews, with his trademark headband, was a new breed of Springbok second row forward when he was fast-tracked into the team in 1994.

Not the cumbersome lump who had occupied that position in years gone by but an athletic ball-carrier whose handling owed much to his early career as a water-polo player.

As he looks back 24 years, though, to those heady days when Nelson Mandela was forging his 'rainbow nation', a shiver runs through him.

"I loved the World Cup up until the semi-finals," Andrews says. "Then I hated it. It was the most terrifying thing I have ever experienced."

The reason for the terror was coach Kitch Christie's decision, based on his desire for more height at the back of the line-out, to switch Andrews to number eight for the semi-final against France and the subsequent final against New Zealand.

"The last time I played eighthman I was 13! It was crazy. But Kitch said I reminded him of Morne du Plessis and that I could be as good as him. 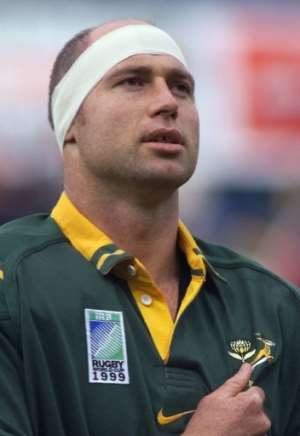 Mark Andrews played 77 times for the Springboks, featuring in the 1995 and 1999 World Cups. By ODD ANDERSEN (AFP/File)

"In the semi-finals I was up against (Laurent) Cabannes and (Abdelatif) Benazzi and in the final there was Josh Kronfeld and Zinzan Brooke.

"They weren't exactly beginners in their position. Zinzan was the best eighthman in the world.

"We were driving to practice on the Tuesday before the final and passed this massive newspaper billboard which had this big slogan: 'Will Andrews cost us the World Cup final?'

"To be 22 and have that pressure was horrendous. Thank God it worked out."

Joel Stransky's extra-time drop-goal which gave the Boks a 15-12 win against the Jonah Lomu-inspired All Blacks ensured that it did, indeed, work out.

Not just for Andrews, who had been replaced by Rudi Straeuli in the extra period, and the Boks but for the entire nation, united by enthusiasm and excitement. 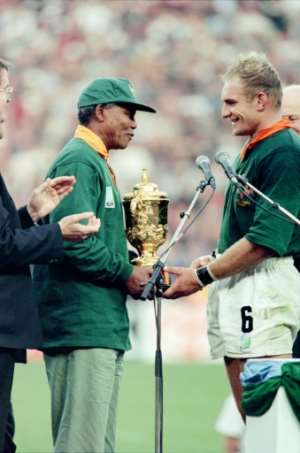 Nelson Mandela inspired the South Africans when he arrived at the 1995 final wearing a Springbok jersey. By Jean-Pierre MULLER (AFP/File)

Mandela had ensured that by turning up to the Ellis Park final wearing a Springbok jersey bearing the number 6 worn by captain Francois Pienaar. It was the image which captured the imagination of the world -- and Hollywood.

The long-term impact of winning in 1995 has been questioned by many but Andrews is in no doubt it helped to break down barriers.

"I remember a couple of months later playing golf in the Eastern Cape and these fellows came out of the bush where they were living and asked to caddy for us.

"One guy looks at me and says 'I know you' but he couldn't work out where from. When we reached the fourth he started jumping up and down and pointing at me and shouting 'Bokke! Bokke! Andrews!'

"I was amazed. If this guy living in the bush in the middle of nowhere recognised me then we had done something right."

Andrews, who also played in the 1999 World Cup and won 77 caps before retiring from the game in 2004, is now a "semi-retired" property developer.

He will be watching this year's event from his home in the Eastern Cape and he is quietly confident that the Boks will lift the Webb Ellis Cup for the third time.

"I rate them up there even if they are fifth in the world rankings," he says.

"You have to take note of their performance over the last six months. They drew with New Zealand in Wellington, gave Australia a proper smack and beat a very good Argentina side.

"They have depth in most positions and they have a number of world class players.

"Handre Pollard at number 10 is a world class player, possibly the best fly-half in the world today, and Malcolm Marx at hooker has an incredible presence.

"You have a world-class lock pairing and the wingers are phenomenal, they have the ability to create space and finish.

Andrews, who played under Pienaar during the 1995 World Cup and Joost van der Westhuizen four years later, is also impressed by the current captain Siya Kolisi, the first black player to skipper South Africa at a World Cup. 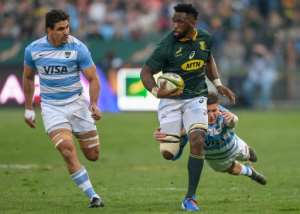 Siya Kolisi is the first black player to captain South Africa at a World Cup. By Christiaan Kotze (AFP/File)

"Hell of a guy," he says. "Very humble, solid and a decent human being. Reminds me of Gary Teichmann. He's not going to give a big speech to inflame the team but he is a solid leader and the players like him and will follow him.

"One of the strengths of this team is that you no longer have 'quota' players who in the past have struggled and affected the psychology of the team.

"Everyone in this team, regardless of their skin colour, deserves to be there. Now we have the best 15 taking the field."

"We lost that for a while. Now Rassie seems to be getting that back. And that is a good sign for the Springboks."