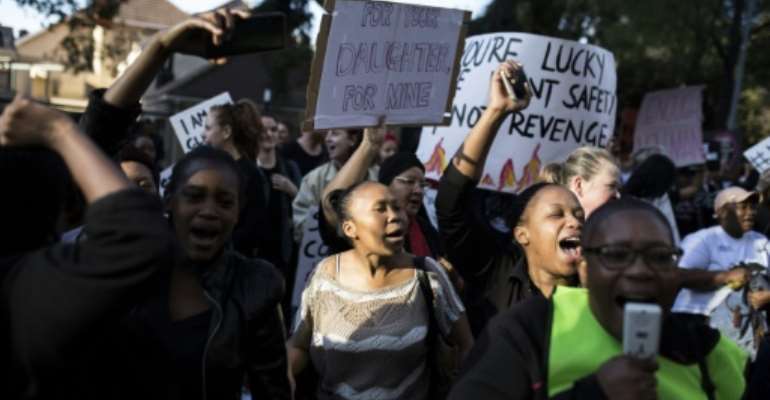 With placards stating "Enough is enough", hundreds of protesters marched in Johannesburg on Friday to protest at gender-based violence in one of the world's most crime-ridden countries.

Demonstrations in South Africa have been mounting over the rising toll of murders, rapes and abuse of women and girls, and a sense of impunity and government failure that surrounds it.

"I deal with kids coming through my door complaining about rape," said Tshego Modisane, a 27-year-old teacher from the township of Soweto.

"They say 'I have been raped by my uncle, violated by my dad, my step-dad,'" she told AFP, clutching a sign that read "YES #menaretrash".

"All these kids are vulnerable girls who have nowhere else to go."

More than 40,000 incidents of rape were reported to the police between April 2018 and March this year. By GUILLEM SARTORIO (AFP)

More than 40,000 incidents of rape were reported to the police between April 2018 and March 2019 -- a figure likely to be far short of the true numbers.

President Cyril Ramaphosa vowed to review laws and crack down on perpetrators last week, after hundreds of women assembled on the sidelines of an economic summit in Cape Town to draw attention to the issue.

But frustrated by the pace of change, some 500 demonstrators -- mainly women -- gathered again in Johannesburg to demand "action not words".

"It will not be business as usual," they chanted, as police watched on the sidelines.

"The law just has to be stricter. There should be no bail for rapists, it's ridiculous," said Natalie Pool, 36, adding that she remained sceptical about Ramaphosa's promises.

Blood-stained sheets and clothing were laid out in front of Johannesburg's stock exchange in Sandton -- one of the city's most affluent areas -- to call for more support from businesses and banks.

"Dear private sector, your silence is uncomfortable," an organiser shouted into a megaphone, before inviting participants to observe a moment of silence for the latest victims.

South Africans have recently been shocked by the separate murders of three young women. By GUILLEM SARTORIO (AFP)

South Africans have recently been shocked by the separate murders of three young women.

A 19-year old university student and a 14-year old schoolgirl were killed in Cape Town earlier this month - the former raped and beaten to death on her way to a post office.

Boxing champion Leighandre "Baby Lee" Jegels, 25, was allegedly shot dead by her partner, who was a police officer, last month.

Their stories triggered outcry and soul-searching in a country that often appears numb to murder and sexual violence.

"There was a whole lot of hush culture when it came to abuse, particularly around gender-based violence and sexual issues," Eden Bohulu, 22, told AFP at the protest.

"These issues have always existed but I think it's only now that we've decided to fight."

Siboso Mohlwayo was among the minority of men attending the event.

A young astronomy student, he was protesting in support of his sister, now in high school, who was sexually assaulted as a child.

He was disappointed by the male turnout.

"All of them should have come out as it's their responsibility as humans to fight," he said, the word "Amandla" -- Zulu for "power" - printed on his T-shirt.

Their absence, he said, "shows how much disappointment we can expect from our own nation."