Tunisia gears up for presidential poll steeped in uncertainty 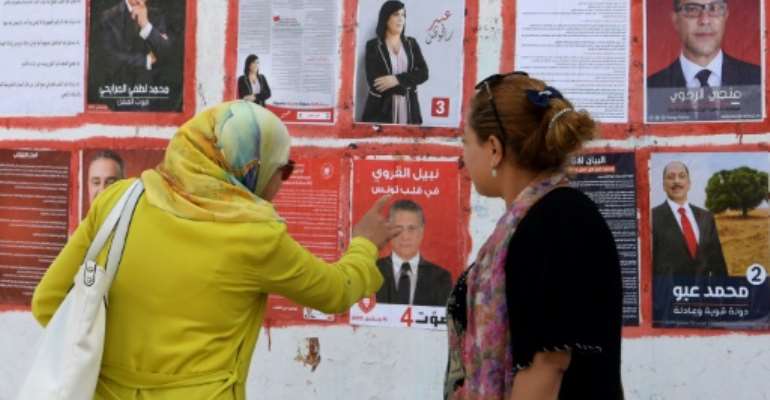 Tunisia will hold on Sunday its second free presidential election by universal suffrage since the 2011 uprising that toppled an autocratic regime. By FETHI BELAID (AFP/File)

Tunisia will hold on Sunday its second free presidential election by universal suffrage since the 2011 uprising that toppled an autocratic regime, with growing uncertainty over who will reach the next round.

Twenty-six candidates are in the race, including the incumbent prime minister and a media magnate who was arrested just weeks before the polls, as well as a presidential hopeful put forth by an Islamist-inspired party.

Seven million voters are expected to head to the ballot box after a campaign that largely focussed on social and economic challenges that have plagued the North African country's fledgling democracy.

"There are favourites and everything is possible, but even God cannot predict the results of the first round, let alone what will happen next," columnist Ziyed Krichen said.

Political analyst Hatem Mrad agreed. "This election is really one of uncertainties," he said.

Tunisia has been praised as a rare success story for democratic transition after the Arab Spring regional uprisings sparked by its 2011 revolution.

Three years later, it held its first post-revolution election, during which the political fault lines were clear, said Mrad, with Islamists squaring off against modernists.

But this time around, the differences are huge, with a plethora of candidates -- Islamists, secularists, populists and partisans of the toppled regime -- political programmes and issues, he added.

Preliminary results are expected to be announced by the electoral commission on September 17, but the date of the second round, which will decide the presidency, is not yet known. 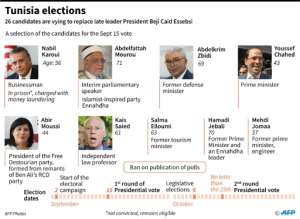 Twenty-six candidates are in the race, including the incumbent prime minister and a media magnate who was arrested just weeks before the polls, as well as a presidential hopeful put forth by an Islamist-inspired party. By Vincent LEFAI (AFP/File)

Karoui's supporters accuse Chahed of orchestrating his arrest, a charge denied by the ambitious prime minister who became the country's youngest ever head of government in 2016 at age 40.

A controversial businessman, Karoui has built his popularity by using his own Nessma television channel to launch charity campaigns, handing out food aid to some of the country's poorest.

On Wednesday, the jailed candidate started a hunger strike, according to a member of his defence team, Ridha Belhaj.

Studies suggest that his arrest boosted his popularity, and observers say that if Karoui makes it to the second round of voting, it will be hard for authorities to justify keeping him behind bars without a trial. 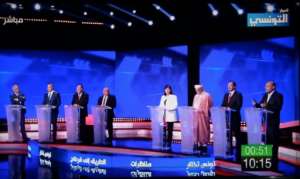 None of the candidates in Tunisia's presidential election appear to have stood out despite squaring off in multiple debates that were broadcast on radio and television. By - (Ettounsiya TV channel/AFP/File)

Also in the race is lawyer Abdelfattah Mourou, 71, who was selected to run by the Islamist-inspired Ennahdha party, and Mohammed Abbou, who was imprisoned under the ousted regime of Zine El Abidine Ben Ali.

Candidates also include former defence minister Abdelkarim Zbidi, a technocrat who said he would "restart the social ladder" and make public services accessible to all Tunisians, if elected.

Two women are also eyeing the presidency, including Abir Moussi, a staunch anti-Islamist lawyer and champion of Ben Ali's regime.

The presidential campaign wraps up on Friday, but none of the candidates appears to have stood out despite squaring off in multiple debates that were broadcast on radio and television. 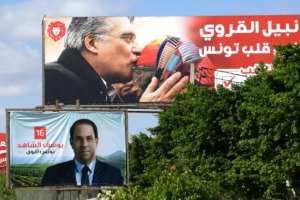 The economic and social hardships that undermine Tunisia's transition to democracy took centre stage during the presidential campaign. By FETHI BELAID (AFP/File)

Around two to three million Tunisians are believed to have tuned in to three major debates, during which candidates were asked to respond to questions drawn randomly.

The economic and social hardships that undermine Tunisia's transition to democracy took centre stage during the campaign.

The country, hit by terrorist attacks against its key tourism sector and security forces, has struggled to combat unemployment and bring down inflation.

Unemployment in Tunisia is at 15 percent, while the cost of living has increased by more than 30 percent since 2016.

The election was brought forward from November after the death in July of Beji Caid Essebsi, Tunisia's first president democratically elected in nationwide polls in 2014.

It will be followed by legislative elections, due to take place on October 6.

Some of the 26 hopefuls have called for the president's powers to be beefed up in Tunisia, which has a parliamentary system.