By Armel Baily with Patrick Fort in Abidjan 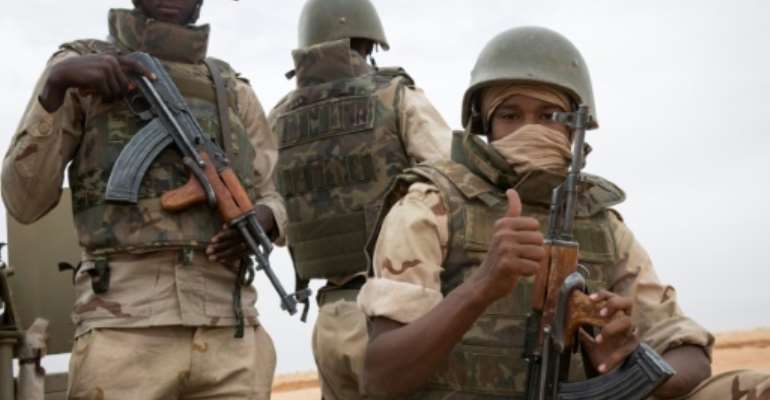 The G5 Sahel force aims at pooling 5,000 troops from five countries -- but lack of funding, equipment and training have been major hurdles. By THOMAS SAMSON (AFP)

West African leaders meet in the capital of Burkina Faso on Saturday for a summit expected to lead to an overhaul of the flailing attempt to roll back jihadism in the Sahel region.

Most of the heads of ECOWAS, a grouping of 15 countries on West Africa's coast and hinterland, are expected to attend the special one-day meeting, which will also be attended by Chad, Cameroon and Mauritania.

Topping their agenda: the record of the so-called G5 Sahel -- a five-nation effort intended to combat terrorism in the fragile region that lies between the Sahara and Atlantic.

Backed by the former colonial power France, the G5 Sahel was created to great fanfare in 2014.

The centre piece of its strategy has been an initiative, launched in July 2017, to pool 5,000 troops from Burkina Faso, Chad, Mali, Mauritania and Niger to wrench back control from ruthless jihadist groups.

But, hamstrung by insufficient funds, training and equipment, the force has only now reached a complement of 4,000 troops, and for many analysts seems to be losing the battle.

UN, French and African forces in the G5 Sahel region. By (AFP)

The nimble rebels have spread from Mali to Burkina Faso and Niger, as well as Chad.

Their hit-and-run raids are inflicting a mounting human, economic and political toll, sparking fears that the coastal countries to the south are next in line.

Lassina Diarra, a regional political analyst, said scathingly the Ouagadougou summit should "mark the burial" of the G5 Sahel.

"The ECOWAS countries have realised that they have to act... that they are threatened," Diarra said.

Mahamadou Savadogo, an academic at the CERRAD research unit into democracy and development at Senegal's Gaston Berger University, said the G5 Sahel "is almost on its knees. It started off the wrong way."

UN Secretary General Antonio Guterres also has a grim view of the situation.

"I totally believe we are not winning the war against terrorism in the Sahel and that the operation should be strengthened," he said last week.

The scale of the challenge facing the G5 Sahel force is huge.

According to the US thinktank the Center for Strategic and International Studies (CSIS), the number of Islamist-linked attacks in the Sahel has doubled each year since 2016.

The scale of the challenge facing the G5 Sahel force is huge. By THOMAS SAMSON (AFP/File)

"Despite significant international engagement and investment, violent extremism is increasing," it said.

Against this grim background, Niger President Mahamadou Issoufou, at a summit of the African Union in July, called for the creation of an "international coalition" modelled on the lines of the loose alliance that fought the Islamic State group in Iraq and Syria.

The idea of a wider international pitch also appeals to Ivory Coast, which in 2016 suffered a terror attack that claimed 19 lives.

Its northern border has been declared by France's foreign ministry to be an "orange" security risk -- French nationals are advised not to go there unless necessary.

"MINUSMA (the UN mission in Mali) and the G5 Sahel are not enough. We have to find wider and more effective means of coordination," Ivorian President Alassane Ouattara said.

French President Emmanuel Macron, who has lobbied relentlessly for donations for the G5 Sahel force, has also signalled a subtle shift in tone.

Flanked by German Chancellor Angela Merkel at the G7 summit in Biarritz last month, he said it was time "for change, in methods and scale."

Savadogo said West Africa's coastal countries "have taken over the problem. The structure (of the force) will be modified, although the outside may be kept."

A French security official, speaking on condition of anonymity, reacted guardedly to the potential outcome of the Ouagadougou summit.

In June 2018, jihadists attacked the G5 Sahel's headquarters in Sevare in central Mali, killing six people. The HQ was relocated to the capital Bamako and its commander replaced. By STRINGER (AFP)

Beyond the military realm, there is a widening acknowledgement among analysts, politicians and army officers themselves that security is only one part of a much broader strategy to stabilise the Sahel.

ECOWAS -- the Economic Community of West African States -- brings together 15 countries whose economies range from regional heavyweights Nigeria and Ivory Coast to the impoverished Liberia and Sierra Leone.

"There are many advantages in seeing the coastal countries taking over the problem. Their economies are wealthier and they have a better chance of luring international donors" for security and development, said Savadogo.