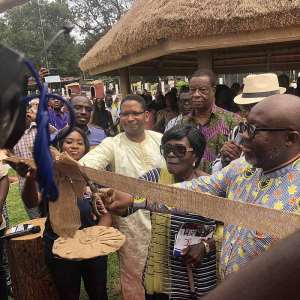 The government of Ghana on Friday launched “e-Ananse Library”, a CSR initiative of West Blue Consult to promote and reignite Ghana’s passion for reading among Ghanaian youth, especially those at the basic level. The campaign is also intended to promote literacy and life-long learning among the populace, including the aged.

Speaking at the launch, the Deputy Minister for Communications, George Andah, who was also the chairman for the programme, said the initiative is not only very laudable and very dear to his heart, but he’s glad that the Centre is well resourced with full ICT package that could be a solution to bridge the gap in Information Communication and Technology usage.

He said the morale behind the establishment was very appropriate and timely, in that, in a growing competitive world, life-long learning had become the only way to grow intellectually.

According to him, knowledge could only be acquired through reading and so Ghana had no option than to reignite the reading culture for the progress “we wish for”.

”We know that information technology is key in making our various selves well equipped, bringing together information and technology in one conducive space ensures that, the e-Ananse libraries serve as a centre for cultural communication, written and verbal communication which will help capitalize the development of our human capital so that, we can compete with the rest of the world in this highly technological century” he said.

Why e- Ananse Library
Valentina Mintah, founder of West Blue Consulting, in her opening address revealed that ”The e-Ananse Libraries, though firmly rooted in Ghanaian and African culture, give our people the wings to fly and soar in the world.”

According to her, the libraries are set to bring together many organizations from Ghana and around the world, whose values and missions are aligned with preserving local culture while embracing the best of what the world has to offer, in terms of knowledge and skills.

”We’ve started with two libraries – our flagship here at Legon and another in Osu – but this is just the beginning. Our commitment to Ghana is long-standing and long-term and we’re working hard to make the e-Ananse Libraries accessible to Ghanaians across the country, ” she said.

The Gender Minister, Madam Cynthia Morrison, charged West Blue Consulting to, as a matter of urgency, establish some of the library facilities in the various prisons to improve the learning culture for the inmates.

”Library establishment is a good one. I charge the e- Ananse team and mother company, West Blue, to get one library also at our various prisons, especially Nsawam. There are innocent souls at that part of the world who are ready to read and learn. It will help equip them in a long term” she said.

Panel Discussion
A panel discussion was held on the Overview of e- Ananse, with Sylvia Arthur as the facilitator.

The session saw Madam Ekua Ekumah, a practitioner and lecturer at the School of Performing Arts, Nana Asaase, a poet, litearcy coach and storyteller ,as well as Reggie Rockstone, popularly known as the Godfather of Hiplife discuss various topics under the theme: ”Ghana’s storytelling in its various forms”

Reggie later expressed his excitement at his invitation to the programme. He said ”It’s so necessary for this initiative concerning what is happening here. Such initiatives like these are needed to better the lives of our kids for greater future prospects. I abandoned everything and headed to this venue and of course, I love the name, e- Ananse. That’s folklore, the Ghanaian tradition; it also sells our heritage more to the outside world”.

The launch was not only on the celebration of the opening of the new libraries, but a commemoration of Ghanaian story-telling in all its forms, from the oral to the written.

The launch also saw many other dignitaries, including Mr Kofi Asante, CEO of GIFEC, Dr Yaw Osei Adutwum, deputy Minister of Education among others.

Nearly all the ministers that participated in the launch appealed the organizers to establish an e-Ananse library in their constituencies.

About e-Ananse Libraries
The e-Ananse Libraries are to help revitalize Ghana’s reading culture and provide people with the tools to compete in the 21st Century by giving them access to high-quality contemporary literature, state-of-the-art computing facilities, and world-class literary events.

The two libraries situated at the University of Ghana, Legon campus and Osu has an e-Ananse technology centre, christened the Innovation Hub, which is equipped with internet-enabled PCs to give library-members access to the full range of resources available on the World Wide Web.

According to Authorities of the library, to register as a member of the e-Ananse Libraries cost of 20 Cedis per year for adults and 10 Cedis Per year for children and opened from Tuesdays to Fridays, 12PM – 8PM as well as on Saturdays, 10am – 6PM.