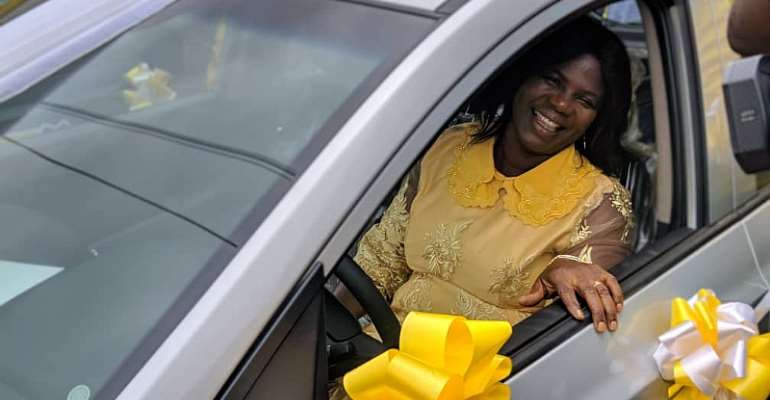 Users of MTN in and around then Central Business District of Kumasi who has not yet taken interest in the ongoing MTN [email protected] promotion are biting their fingers at the exciting prizes they have lost already.

Patrons at a short ceremony to present prizes to winners of the ongoing promotion at the MTN Kejetia branch vowed to be receiving theirs soon.

Their excitement and zeal to join the promotion is as a result of the mouth-watering awards winners of the July promotion received.

All the winners could not hide their excitement at the awards assuring to maintain their various positions or win the car in next month’s edition.

Hajia Fati Mohammed who won one of the Hyundai i10 cars still seemed to be in a shock even after she had been called to receive the key to her new car.

“I still can’t believe it. When I received the call and was told about the car, I thought it was a scam but decided to just come and see what is happening only to realize it true”. She managed to utter in her state of amazement.

Wishing to win another car soon, she encouraged other customers of MTN to use the Mobile Money Platform to enhance their chances of winning similar prizes.

The Senior Manager, General Trade for the Northern Sector; Mr. Simon Amo congratulated winners for the July edition of the MTN [email protected] promotion urging them to continue using their product for more mouth-watering rewards.

He explained that the awards are being presented at the doorsteps of the traders to clear all doubts about how prizes are won in such promos and also establish MTN’s relevance to the ecosystems of the various categories of customers.

Mr. Amo believes the MTN MoMo platform is driving the financial inclusion agenda of the country and is the most credible and secure platform that puts control totally in the hands of the customer.

He advised MTN Customers to strive to accumulate more points by doing more Mobile Money Transactions and also advised customers to safeguard their MoMo PINS to avoid being defrauded.